“Abyss” is a new Monday-Tuesday fantasy drama about a magical marble that reincarnates the souls of the dead as entirely different people. Park Bo Young stars as Go Se Yeon, a breathtakingly beautiful prosecutor who is murdered and then brought back to life as an ordinary-looking woman, while Ahn Hyo Seop plays Cha Min, Go Se Yeon’s best friend of over 20 years who is magically transformed into a stunningly handsome man. After their mysterious reincarnations, the two lifelong best friends embark on a quest to find Go Se Yeon’s killer.

However, the two sleuths need fuel to solve the mystery at hand, and the new photos released on May 12 show Go Se Yeon and Cha Min sharing an affectionate meal together at a Korean barbecue restaurant. As Go Se Yeon hungrily devours her food, the caring and attentive Cha Min gently places an apron around her neck, grills her meat for her, and even feeds her a carrot. 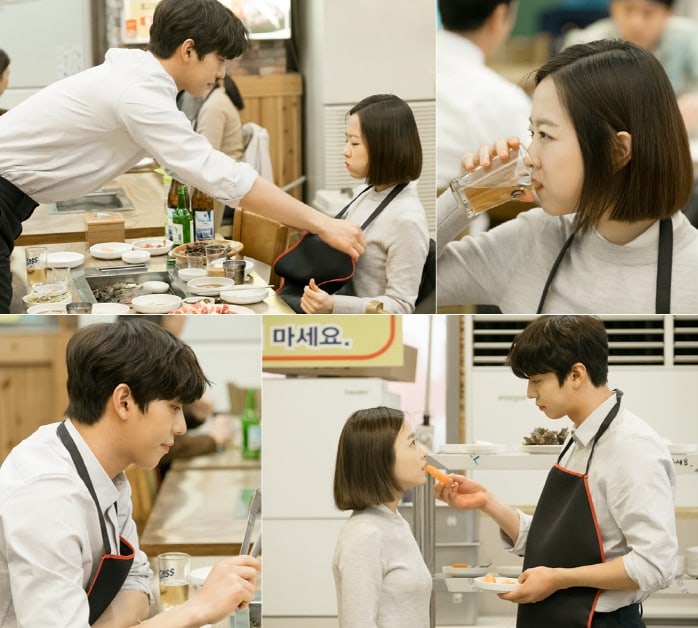 According to those present during filming, Park Bo Young and Ahn Hyo Seop displayed impressive chemistry throughout the scene, playing off one another and throwing out hilarious ad-libs that cracked up the entire crew.

The producers of “Abyss” commented, “Park Bo Young and Ahn Hyo Seop have been going all out in showing off their senses of humor and portraying the realistic, affectionate dynamic of two best friends who have known each other for 20 years.”

They added, “Even when they’re not acting, the two stars’ real-life chemistry has created the most amazing atmosphere on set. Please tune in to the broadcast to see it for yourself.”