Soompi
by K. Do

The moment you’ve all been waiting for… Here are the winners of the 14th Annual Soompi Awards.

Following the 21st anniversary of the founding of Soompi, we celebrate the best of Korean television and music with the 14th Annual Soompi Awards. This year, we collaborated with Twitter to bring you the biggest Soompi Awards yet with over 183 million votes from 210 countries and territories. Your votes and a combination of music chart scores in relevant categories decided the brightest stars of the past year. Without further ado, here they are: 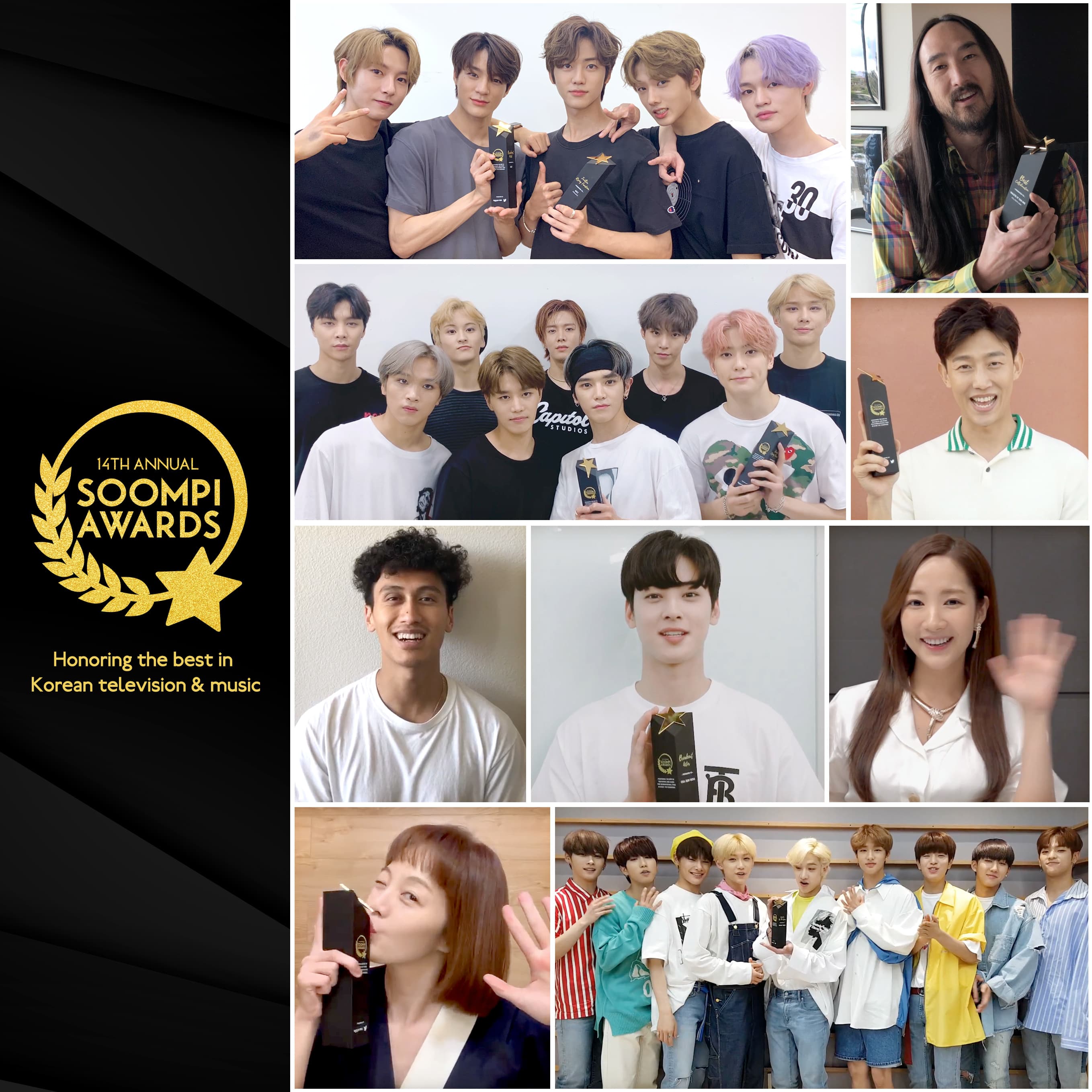 A special thanks also goes out to Edward, the creator and curator of the Soompi Music Chart. Edward shared some insight into some wins below:

Despite spending more time as an actress in recent years, every time IU comes back as a singer, her songs hit the top of our charts and she becomes the leading contender for our Soompi female artist award. After starring in the tvN drama “My Ahjussi” in the Spring, IU came back as a singer and released digital song “BBIBBI” in the fall. Even though IU did not appear on music shows to promote this song, “BBIBBI” was already our No. 1 song in its second week on the chart. It stayed at No. 1 for three consecutive weeks. Her performance on Soompi Music Chart combined with fan votes led to her winning Best Female Solo in the 14th Annual Soompi Awards. It is the sixth time IU has won this award.

BLACKPINK has been a darling on Soompi Music Chart ever since debuting in 2016. The group spent three weeks on top of the chart in 2018 with “DDU-DU DDU-DU.” But perhaps the most dominating statistics for BLACKPINK is, between their two hit songs “As If It’s Your Last” and the above mentioned “DDU-DU DDU-DU,” they appeared on every single week of our chart. There are other artists with matching statistics, but BLACKPINK does it with only two songs! It proves that their songs are being popular for an extended period. This consistency enables BLACKPINK to win Best Female Group for the first time in Soompi Awards.

We can write many pages of BTS’s achievements on our music chart. But the best achievement comes with their song “IDOL,” which spent six consecutive weeks on top of our chart. Having a song to spend that many weeks at No. 1 is almost unheard of, due to the larger number of artists and the faster turnover of hit songs these days. BTS repeats as the winner of Artist of the Year, Album of the Year, and Best Male Group in the 14th Annual Soompi Awards. In addition, “Fake Love” won the Music Video of the Year award, and their collaboration with Steve Aoki for “Waste It On Me” won the best collaboration award. Two BTS members also won solo awards. RM won Best Male Solo, and V won the best choreography award with “Singularity.”

Even though EXO had a late start in 2018 – they did not release their fifth album “DON’T MESS UP MY TEMPO” until November – it did not affect their popularity at all. Their title song “Tempo” reached No. 1 on our chart. It barely made the cut to be nominated timeline-wise but ended up winning the prestigious Song of the Year award. In addition, EXO also won the Latin America Popularity award and the Twitter Best Fandom award, proving that they continue to be a major force in K-pop, both in Korea and internationally.

*How the winners are decided: Our music awards are based on votes by international fans and our own Soompi Music Chart. Our chart is the ultimate litmus test for popularity outside of Korea, taking into account both official Korean rankings and the rankings of artists on the Soompi site to accurately gauge the international popularity of the top groups. Our drama awards are based on the votes of passionate drama fans. Any illegal voting from bots were disqualified for all categories. Voting for our “Twitter Best Fandom” category occurred exclusively on Twitter.