The upcoming KBS 2TV drama is a fantasy romance between Seo Yi Do, a genius designer in a creative slump (played by Shin Sung Rok), and Min Ye Rin, a mysterious fashion model who has been to hell and back (played by Go Won Hee). The two meet right as they are about to lose the meaning in their lives, and they develop chemistry as natural enemies who are thrown into trouble whenever they cross paths.

The newly released stills display the two characters in the midst of one of their incidents. Min Ye Rin appears at a park that Seo Yi Do exercises at daily, and she threatens him through the live broadcast she is doing on her phone. He looks around and catches sight of her while she captures him on screen and throws herself into the water, much to his surprise. The images heighten viewers’ curiousity as to what exactly happened between the two. 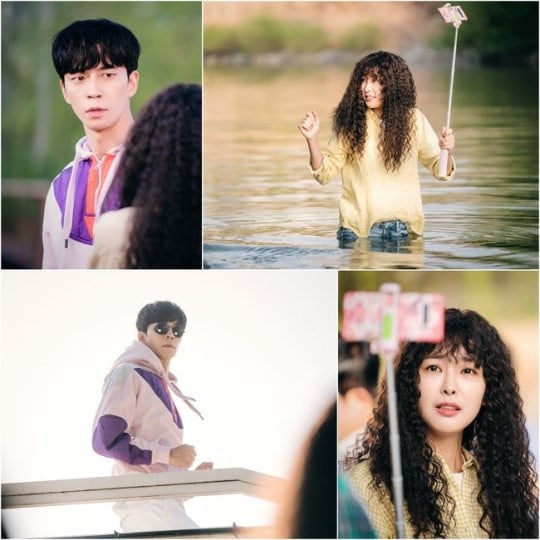 This scene of Shin Sung Rok and Go Won Hee bickering was shot on April 10 in a park in Seocho. It was reportedly a hectic situation due to the crowd that had gathered, but the two actors calmly went through rehearsals to sync their movements and gestures. Because Go Won Hee had to enter the water wearing thin clothes in the midst of suddenly chilly weather, she was seen doing all kinds of warm-up exercises to raise her body temperature. She earned applause for her enthusiasm as she went into the water in one go.

A producer for the drama stated, “This is a perfect example of Shin Sung Rok and Go Won Hee showing the affection and enthusiasm they have towards ‘Perfume’ on set. They are heightening anticipation for the drama through their concentration and passionate acting during filming. Please show lots of interest for this fantasy romance that these two actors are putting their all into.”