“Angel’s Last Mission: Love” is a fantasy romance between Lee Yeon Seo (Shin Hye Sun), a ballerina who doesn’t believe in love, and Dan (L), a troublemaker angel who becomes her Cupid.

In the first two episodes, Lee Yeon Seo and Dan had a fateful encounter. Although Lee Yeon Seo lost her sight due to an accident, she was able to converse with Dan, who is unable to be seen by humans. Their relationship also took a turn when Dan saved her from a car accident, despite him receiving warnings from a senior angel to not interfere with human lives.

In the released stills, Lee Yeon Seo interviews potential new hires to work in her home, and Dan applies for the position. He wears a fitted suit and sits across Lee Yeon Seo for the interview, but is frozen stiff upon looking at her cold, blank stare. 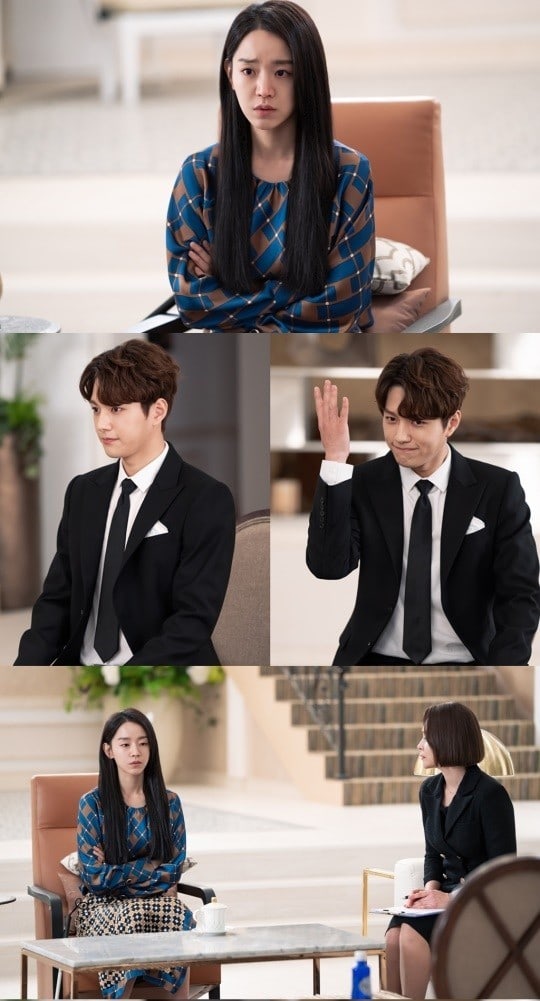 Despite the tension-filled atmosphere, however, Dan begins to wave his hands and emits his characteristic charm. In response, Lee Yeon Seo continues to wear her unwavering, cold expression, which piques viewers’ curiosity about the results of the interview.

On the same day, Dan is given a special mission to find Lee Yeon Seo’s love. However, Dan’s reunion with the ballerina, who doesn’t trust people nor believe in love, heralds a tough mission for the angel. The production team stated, “Dan’s unexpected behavior will stir Lee Yeon Seo’s heart,” and asked for viewers to anticipate the scene.