The stars and writers of tvN’s “Arthdal Chronicles” shared behind-the-scenes stories about their drama!

On May 26, the upcoming series aired a special episode introducing viewers to “Arthdal Chronicles,” including interviews with the cast and production staff.

Explaining why Song Joong Ki had been cast in the role of Eun Seom, writers Park Sang Yeon and Kim Young Heon praised him as a special actor who can express incompatible charms.

As for Jang Dong Gun, who plays the character of Ta Gon in the drama, writer Kim Young Heon remarked, “I wondered how his good looks had managed to create that kind of aura.” Writer Park Sang Yeon added that when Jang Dong Gun had been younger, people had often paid more attention to his handsome face than his acting skills, but that along with his aura, his talent was now beginning to shine through more and more. 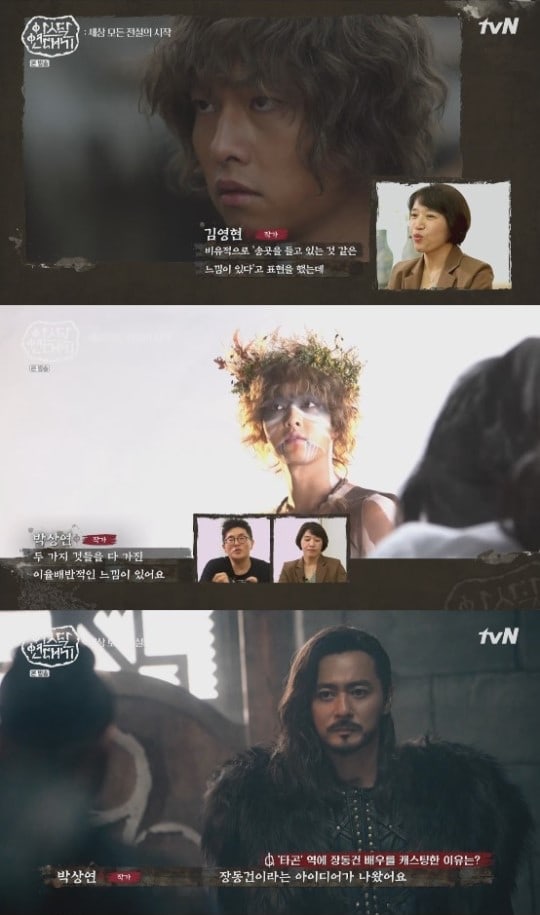 About Kim Ji Won’s character, the writers recalled, “We had drawn concept art for the character Tan Ya. Since this was before the cast had been decided, we just drew it based on the character’s vibe, but I remember asking, ‘Doesn’t this look like Kim Ji Won?’ The picture and Kim Ji Won matched really well.”

The actors also shared their thoughts during the special episode. Song Joong Ki, who rode horses with ease during filming, commented, “I thought that I should train a lot if I didn’t want to get hurt, so I trained hard, and I think the horseback riding scenes turned out well.” He added that he was proactive about practicing and that he tried to get close to the horses, even on days when he didn’t have filming.

Speaking about his co-star Jang Dong Gun, Song Joong Ki remarked, “He’s usually the king of being considerate, but the look in his eyes changes when he transforms into Ta Gon. I was mesmerized by the aura of actor Jang Dong Gun.”

“Arthdal Chronicles” premieres on June 1. Check out the latest teaser for the drama here!