“Abyss” is a fantasy drama about a magical marble that reincarnates the souls of the dead as entirely different people. Park Bo Young stars as Go Se Yeon, a breathtakingly beautiful prosecutor who is murdered and then brought back to life as an ordinary-looking woman, while Ahn Hyo Seop plays Cha Min, Go Se Yeon’s best friend of over 20 years who is magically transformed into a stunningly handsome man. After their mysterious reincarnations, the two lifelong best friends embark on a quest to find Go Se Yeon’s killer.

Previously in episode seven, the 20-year friendship between Park Bo Young and Ahn Hyo Seop started blossoming into something more, causing viewers to anticipate what their future holds.

In the new stills, Park Bo Young is touching Ahn Hyo Seop’s cheeks affectionately to silently thank him for always being with her for the past 20 years. Ahn Hyo Seop raises questions by approaching Park Bo Young whose face is half covered by a blanket. Their gazes are dripping with sweetness, and attention is drawn to whether the romance between the two will begin. 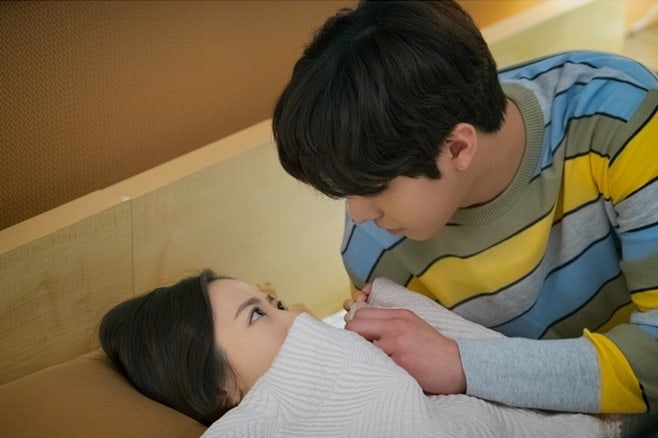 During the rehearsal, the two actors showed off their teamwork by working with director Yoo Jae Won to meticulously align their lines and check even the most detailed gestures. It is said that their passion for acting and the crew’s efforts helped achieve a beautiful, romantic scene.

The production crew stated, “Starting from episode 8, the two will end their 20-year-old friendship and officially start their new romance. Please look forward to tonight’s [May 28] episode.”