On the May 28 episode of JTBC’s “Idol Room,” the MCs revealed that the WINNER members don’t meet up often and that Kim Jin Woo and Song Mino saw each other for the first time in three months outside despite living in the same house together.

Kim Jin Woo responded, “It hasn’t been three months, but it has been a pretty long time.” When asked why, the singer explained, “We can’t see each other because our night and day are different.” WINNER’s leader Kang Seung Yoon interjected, saying, “That’s not the problem. Kim Jin Woo recently installed a TV in his room, so he doesn’t come out of his room.” Song Mino added, “There’s a TV in the living room, but he just had to. There’s even a lock on his door.”

The MCs were perplexed as to why Kim Jin Woo would put a lock on his door when he lives with Song Mino, and MC Jung Hyung Don commented that Song Mino must’ve gotten his feelings hurt. The rapper admitted that he was hurt.

MC Defconn made everyone laugh by joking, “Has Song Mino been accused of kleptomania?” and MC Jung Hyung Don asked Kim Jin Woo if anything has ever disappeared from his room. Kim Jin Woo replied yes and revealed that a lighting fixture disappeared. “I really like lighting so I have a lot in my room, but one of them is missing,” said the singer. “Song Mino recently came into my room and asked me if there were any lighting fixtures that I didn’t need that he could use for his studio. And then one disappeared.”

WINNER’s Lee Seung Hoon said he saw a new lighting fixture in Song Mino’s V Live. The rapper explained, “I went into his room with some difficulty. I created my own drawing studio next to his room and it was really dark, so I asked him if he was using this pretty light since it was off and he had many of them. He said he was using it so I said okay and left, but now he’s making things up.”

Kim Jin Woo said that he just decided to let it go after accepting the fact that Song Mino had taken the light, and the rapper revealed, “I bought all of the lights from an online store because you didn’t give any to me. I bought about three lighting fixtures. With his personality, Kim Jin Woo would usually give it to me, so I thought he would definitely give me one.” 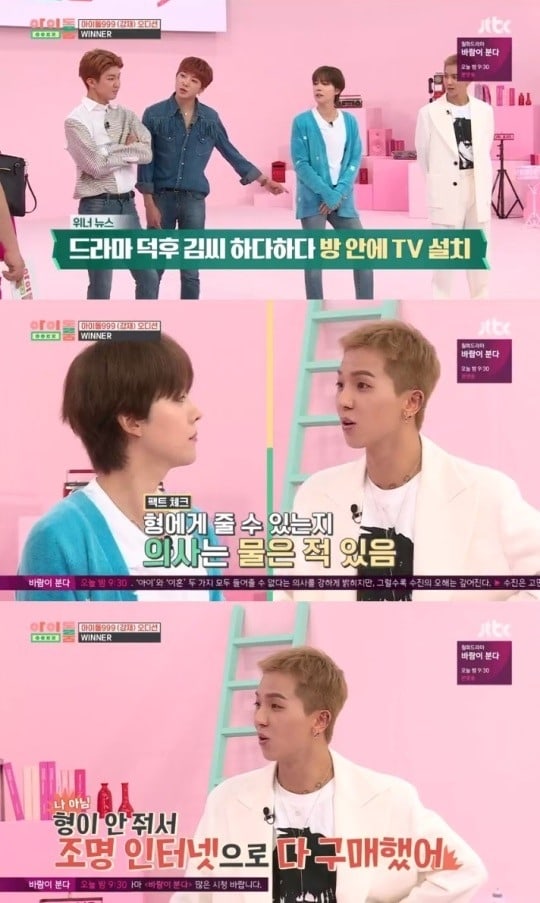 WINNER recently made a comeback with their latest mini album “We” and title track “Ah Yeah.”