FTISLAND’s friendship is going to help fund a bright future for their groupmate Minhwan’s son!

On the May 29 broadcast of KBS 2TV’s “Mr. House Husband,” Yulhee and Minhwan celebrated their son Jae Yul’s first birthday.

The couple invited family and friends for a party, and FTISLAND’s Lee Hong Ki and Lee Jae Jin attended the event. During the birthday party, the MC began playing a game where guests had to guess facts about the birthday boy.

When asked, “Did Jae Yul say mom or dad first?” Lee Hong Ki correctly guessed “dad.” The singer stood in front of the room and introduced himself as Jae Yul’s uncle who has a relationship with him that’s thicker than blood.

The MC then said, “Please repeat after me in a loud voice: Jae Yul, please grow up well. When you go to college, I’ll pay for your tuition.” Lee Hong Ki appeared startled as he realized what was happening. With a laugh, he said, “I’ll pay for the first quarter of your tuition” and earned cheers from everyone.

The second question asked was when Jae Yul walked by himself for the first time. Lee Jae Jin raised his hand and correctly guessed that the baby hadn’t walked by himself yet. He also stood in front of the room and the MC asked if he was going to pay tuition for Jae Yul’s second semester of college. Lee Jae Jin nodded and earned applause. 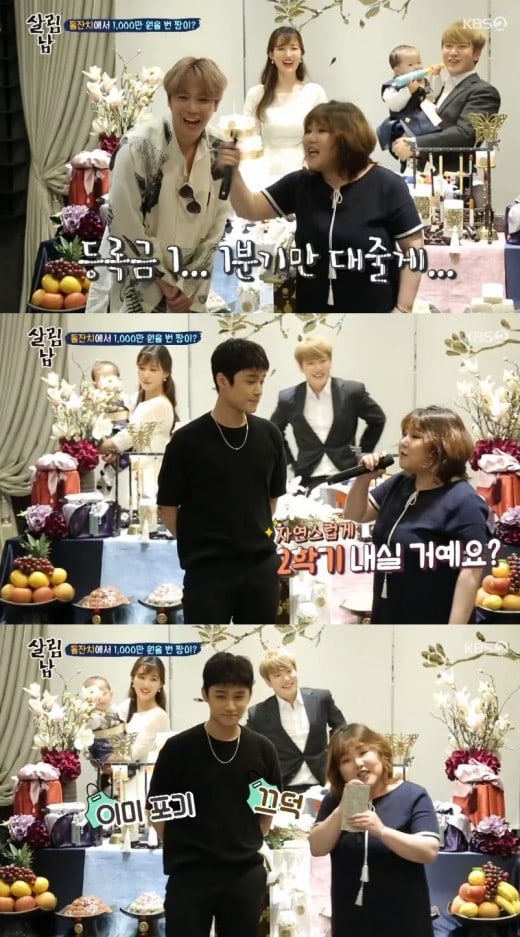 Minhwan and Yulhee welcomed Jae Yul in May 2018 and got married in October of the same year.