IU and Yeo Jin Goo already have impressive chemistry in a video of the first script reading for “Hotel del Luna.”

The script reading video begins by introducing the director and writers. Director Oh Choong Hwan shares, “I will work hard to make a memorable drama.” He previously directed works such as “Doctors” and “While You Were Sleeping.” Hong Sisters, the scriptwriters, remark, “We hope that it will be a happy time filming on set.” The writing duo have previously penned popular dramas such as “Hwayugi,” “Master’s Sun,” “The Greatest Love,” “My Girlfriend Is a Gumiho,” and more. 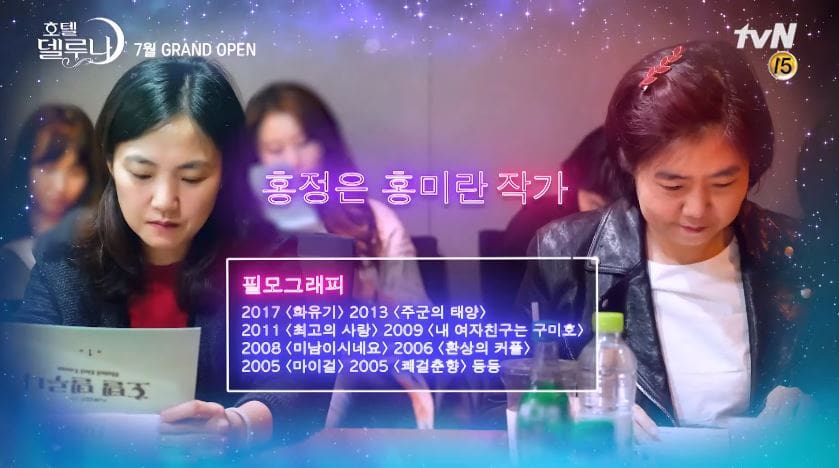 “Hotel del Luna” is introduced as a drama about an elite hotelier Goo Chan Sung (played by Yeo Jin Goo) who becomes the manager of Hotel del Luna after a fateful incident. He works with CEO Jang Man Wol (played by IU), who has a bad temper but stunning beauty.

The rest of the cast members, including several veteran actors, introduce themselves and their characters. Jung Dong Hwan plays Noh Joon Suk, the hotel’s general manager of 30 years. Shin Jung Geun plays Kim Seon Bi, former scholar and current bartender who has worked in the hotel for 500 years. Bae Hae Sun plays room manager Choi Seo Hee, formerly the eldest daughter of one of the most powerful families in Joseon.

Block B’s P.O takes on the role of Ji Hyun Joong, a front doorman who is eternally a teenager after dying in the Korean War. gugudan’s Mina takes on the role of Kim Yoo Na, the hotel’s confident and clever intern. Seo Yi Sook plays Ma Go Shin, and Jo Hyun Chul plays Sanchez, Chan Sung’s roommate and the prince of the global pizza chain world.

IU perfectly immerses herself into the character of Jang Man Wol, showing many layers of her prickly personality from her cool, biting remarks to her fiery temper. Yeo Jin Goo is smooth and sophisticated as Go Chan Sung but makes everyone laugh when he shows that his character is secretly faint-hearted.

IU and Yeo Jin Goo’s chemistry is on point as they immediately show their dislike for one another, and their witty banter continues even when Yeo Jin Goo’s character is possessed by P.O’s.

“Hotel del Luna” is slated to air in July.

Check out the script reading video below!