SBS’s “The Secret Life of My Secretary” has already reached its halfway point!

“The Secret Life of My Secretary” is about the romance between Do Min Ik (Kim Young Kwang), a man with face blindness, and his secretary, Jung Gal Hee (Jin Ki Joo).

In the latest episode, Do Min Yik and Jung Gal Hee shared a kiss, signaling that romance may finally begin to blossom. 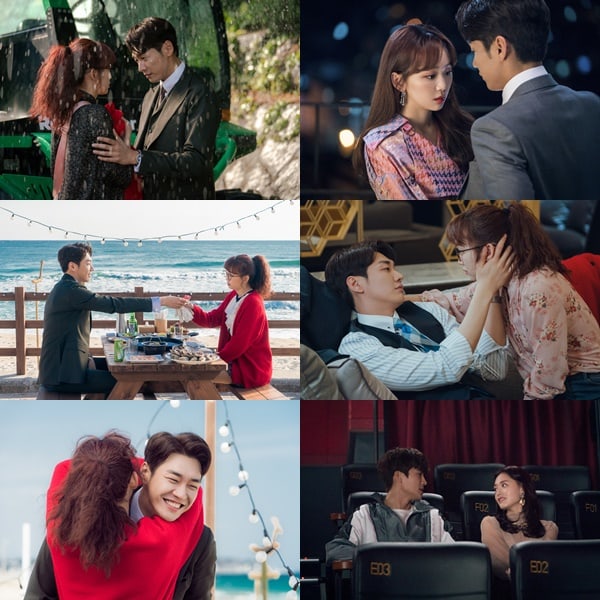 Here are four points to look out for in the second half of the drama.

Will Jung Gal Hee come clean about her double life?

Jung Gal Hee continued to meet with Do Min Yik while pretending to be Veronica Park (Kim Jae Kyung). Though everything began out of curiosity, their feelings for each other grew deeper and deeper, which caused Jung Gal Hee to feel even more guilty about lying to Do Min Yik. In episode 16, Jung Gal Hee’s identity was on the verge of getting revealed as they enjoyed a “12-hour date.” Viewers can look forward to finding out whether or not Jung Gal Hee will tell Do Min Yik about her secret and possibly begin a true romantic relationship.

Will Do Min Yik overcome his face blindness and start a mutual relationship with Jung Gal Hee?

Do Min Yik has figured out that he can see people’s faces if his blood pressure is brought up to a certain point. Though he likes Jung Gal Hee when she’s pretending to be Veronica Park, his secretary Jung Gal Hee also catches his attention. After their kiss, Do Min Yik may be able to see Jung Gal Hee’s face and realize that it was the same person all along.

The preview for episode 17 showed Do Min Yik staying over at Jung Gal Hee’s house and keeping her company while her family was away. Viewers are highly anticipating what will happen that night.

What will happen to Veronica Park and Ki Dae Joo?

Veronica Park continuously made up excuses to meet Ki Dae Joo (Koo Ja Sung) and expressed her feelings for him. Meanwhile, Ki Dae Joo went back and forth between giving her hope and shutting her out completely. However, the two grew closer after their date at the movie theater, indicating potential progress in their relationship.

What is the truth behind the suspicious individuals?

From Ki Dae Joo to Lee Eul Wang (Jang So Yeon) and Eun Jung Soo (Choi Tae Hwan), the show is filled with characters that are hiding something. Ki Dae Joo, Do Min Yik’s best friend, was seen meeting with the man that attacked Do Min Yik, and he has constantly put Do Min Yik in danger of being dismissed from his board of directors’ position. Furthermore, the truth behind Eun Jung Soo’s “boss” and the suspicious USB drive is expected to be revealed in the second half of the show.

The drama’s production team shared, “Following Kim Young Kwang and Jin Ki Joo’s kiss, the drama is entering into its second half, where a mutual romance will begin and the truth behind the mysterious cases will be unveiled. Please look forward to the sweet yet heart-stopping second act of ‘The Secret Life of My Secretary.'”

The upcoming episode of “The Secret Life of My Secretary” will air on June 3 at 10 p.m. KST.

Check out the latest episode below in the meantime!