The teaser follows Kim Soo Ro as he recruits a team of celebrities to help run his new team, the Chelsea Rovers. He can be seen meeting up with Lucky, Lee Si Young, NU’EST’s Baekho, EXO’s Kai, and Park Moon Sung, doing his best to convince them to join him as he talks about being a team together and learning about soccer.

Kai looks at him intently before getting up from his seat as he says, “My mom told me not to sign contracts like this,” to which Kim Soo Ro quickly remarked, “Don’t tell your mom then,” making Kai laugh.

The team is set to go through ups and downs in their journey with the Chelsea Rovers, but one thing for sure is that it looks like a lot of fun!

“Let’s Go, Man Soo Ro” will follow Kim Soo Ro as he personally meets the soccer players that belong to his football club, the Chelsea Rovers, and gradually learns how to lead the club as its new president.

The newly released poster for the variety program has a design reminiscent of the ’80s due to its retro images and font. With its vintage vibe and bright red background, the poster reads, “I want to run like my life depends on it,” with the caption saying, “A drama of the underprivileged level 13 league of English football pioneering a wasteland.”

The poster also shows the phrase, “‘Lack’ and ‘loss,’ the arrival of all generations that possess the ‘dreams’ we’ve forgotten,” along with names and pictures of the cast members including EXO’s Kai, NU’EST’s Baekho, actress Lee Si Young, sports commentator Park Moon Sung, and Lucky, an entertainer originally from India. In the background are also members of the Chelsea Rovers in uniform, making viewers even more curious about the team. 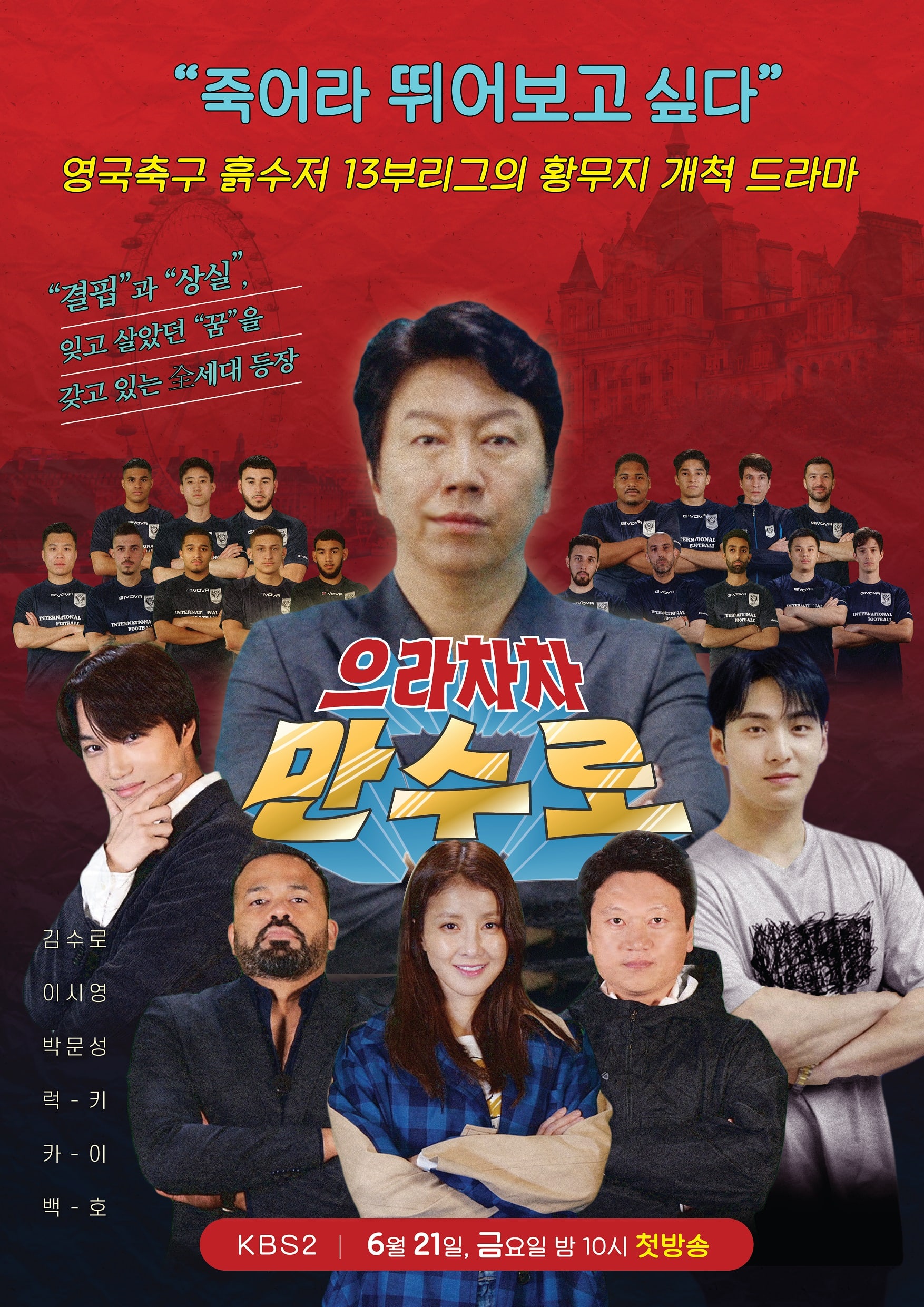 Meanwhile, the teaser video for “Let’s Go, Man Soo Ro” begins with Kim Soo Ro saying that he’s embarked on a new journey by going to England to achieve his new dream without knowing what awaits him in the future. The caption reads, “October 2018, Man Soo Ro achieves a small dream.” When asked how he came to take on this challenge, Kim Soo Ro says, “This is the one thing I’ve wanted to do besides acting,” and EXO’s Kai responds, “I think it’ll be amazing. I’d really want to do it.”

However, the team faces many difficulties, including a tight budget. Sports commentator Park Moon Sung says, “We have no money, the team looks like it’s going to disband — nothing is going properly right now!” Nonetheless, with the inspiration from the hard working football players, the team works endlessly towards victory. The teaser finishes off with the caption, “This is not a variety show about football. This is a story about a dream.”

The show will premiere on June 21 at 10 p.m. KST. Watch the full teaser below!