In the photos, they face each other with very different expressions on their faces. While Tae Joon looks at Sun Young sharply, she completely avoids his gaze and looks intently at whatever is behind him. Viewers can look forward to their tense relationship and the events that will occur both to and between the pair. 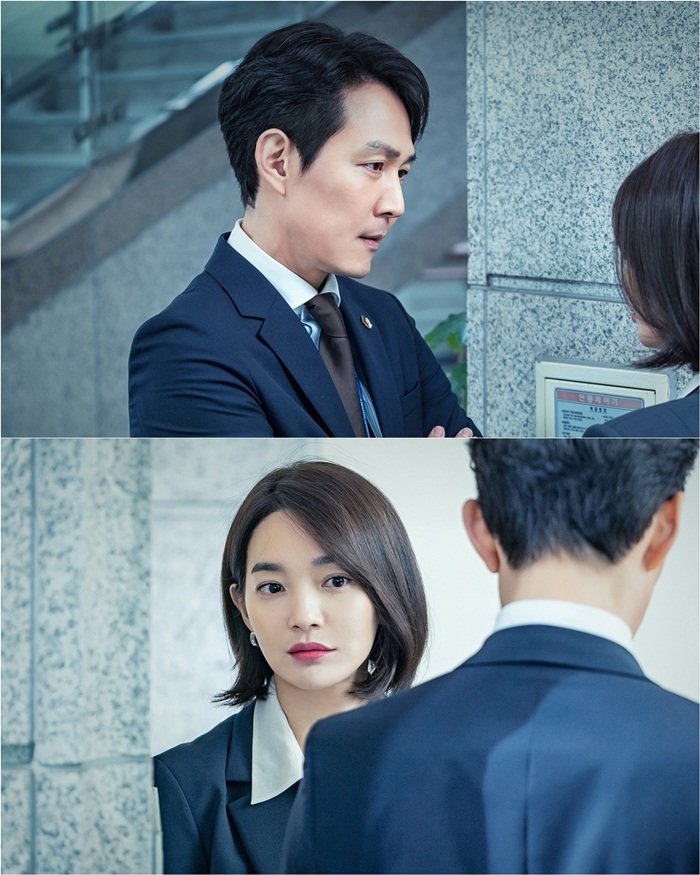 Sun Young received her nomination for assemblywoman from a senator within her party, Jo Gab Young (played by Kim Hong Fa). She has a strange relationship with Tae Joon, as he is the advisor to her rival Song Hee Seob (played by Kim Kap Soo). While their exact relationship is hard to define, viewers can look forward to how these two ambitious politicians work in order to achieve their goals and how they compare to one another.

Lee Jung Jae and Shin Min Ah, who are working on their first project together, shared, “Since we have such great chemistry, we are currently filming with incredible energy.”

A producer added, “The main point of the drama is the reason why the two characters are in conflict, as well as the hidden story behind that. Lee Jung Jae and Shin Min Ah are carrying both the drama and the set, and are showcasing the best acting and the best chemistry. Please look forward to their strange relationship and the real and interesting story of ‘Advisor’ until its premiere.”

The director of “Advisor” is behind works such as “Miss Hammurabi,” “The K2,” and “Slave Hunters,” while the writer is credited for projects including “Life on Mars” and “Bring It On, Ghost.” It is also produced by Studio & New, the company behind “Miss Hammurabi” and “Beauty Inside.”

If you haven’t already, watch the teaser here!

Lee Jung Jae
Shin Min Ah
How does this article make you feel?