tvN’s “Arthdal Chronicles” has released new stills of Song Joong Ki as he enters the civilization of Arthdal!

Song Joong Ki has taken on the role in the drama of Eun Seom, a member of the Wahan tribe who was born from a human mother and a Neanderthal. However, once the people he’s loved and grown up with are captured and taken to Arthdal, he must overcome numerous obstacles in order to save them.

Previously, Eun Seom’s peaceful life in Yiark with Tan Ya (played by Kim Ji Won), the shaman and descendant of the Wahan clan mother, was interrupted by the Daekan forces, creating a sudden twist in the story. However, before the capture, despite being called a liar and becoming in danger of getting kicked out for stealing a horse, Eun Seom enjoyed lovely moments with Tan Ya, who is also cursed under the blue star just like him.

Unfortunately, the Daekan forces of Ta Gon (played by Jang Dong Gun) invaded Yiark and dragged Tan Ya and the people of the Wahan tribe away. In the end of the second episode, Eun Seom rode off on the legendary horse Kanmoreu in order to rescue his tribe, creating a powerful ending scene and leaving viewers curious about to what’s to come.

With Eun Seom expected to begin his pursuit, new stills of him in the decisive location of Arthdal have been revealed. Eun Seom, who has never stepped foot into the civilized world, is shown to have received a tremendous shock from entering the enormous civilization of Arthdal. Standing in the midst of many people passing by, Eun Seom has a curious expression on his face that’s a mix between shock and fear. His usual smile has disappeared completely as he has been severely taken aback. 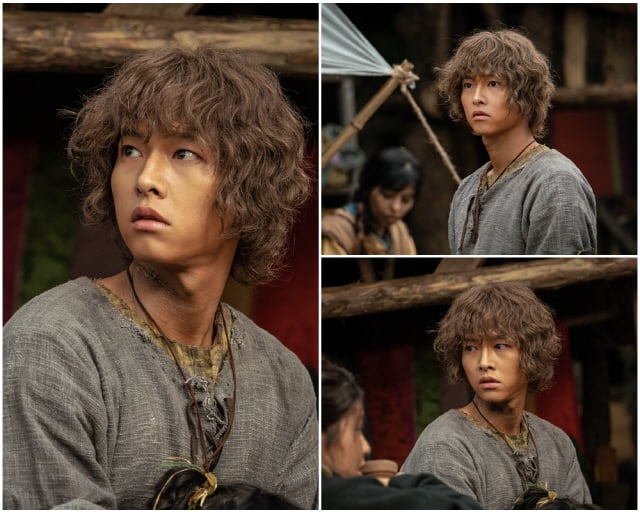 The released stills highlight a symbolic scene that showcases the stark difference between Eun Seom and the people of Arthdal, as well as his first small victory over Arthdal. During the filming, Song Joong Ki discussed seriously in depth with director Kim Won Seok in order to imagine the scene and perfectly portray Eun Seom’s shocked emotions.

The production team shared, “Although Eun Seom has nobly set out to face the Daekan forces that has completely taken away his happy days with the Wahan tribe and Tan Ya, this is a scene with a tense energy. Please look forward to how the young man Eun Seom, who was transparent and pure before coming to Arthdal, will change as well as Eun Seom’s serious transformation from before and after entering Arthdal.”

The next episode of “Arthdal Chronicles” will air June 8 at 9 p.m. KST.