Super Junior’s Kyuhyun shared his thoughts on academics on KBS 2TV’s “Happy Together.”

On the June 13 episode, the MCs asked about the time he received the Ministry of Science and Technology Award for scoring in the top five percent in math.

Kyuhyun explained, “I didn’t do well in all subjects like Jun Hyun Moo and Oh Sang Jin. I only stood out in math and joined a special math class that was established by the school. I went and students ranked first to tenth in the school were gathered there. I wondered why I was there, but I was able to solve math questions that no one else could solve. I then thought that I might be a bit better than these students in this field and felt joy.”

The MCs were then curious about an emergency meeting that was held at Kyuhyun’s high school about a decision regarding his future as a model student. The singer said, “Three months before the college entrance exam, I had to attend the Chin Chin Star Festival for two nights and three days. It wasn’t a situation where my home and school could easily give me permission to go. But my homeroom teacher said that we don’t know what could happen in my future and that this could be a chance for me, and worried that they might be blocking my future with academics. I made a promise that I’d study really hard once I got back, and they let me go for two nights and three days. I went to the festival and was cast by SM Entertainment.”

He continued, “If I hadn’t gone to the Chin Chin Star Festival, I might be doing chores at my dad’s academy. My dad has owned an academy for over 20 years. I think he was really worried that the son of the academy owner might not be able to go to college. So I used to study at the academy and at home, and I got a lot of stress about studying since I was young.”

Kyuhyun concluded, “If I have children in the future, I don’t want to make them study. Even if they want to be an idol, I’d tell them to do what they want to do.” 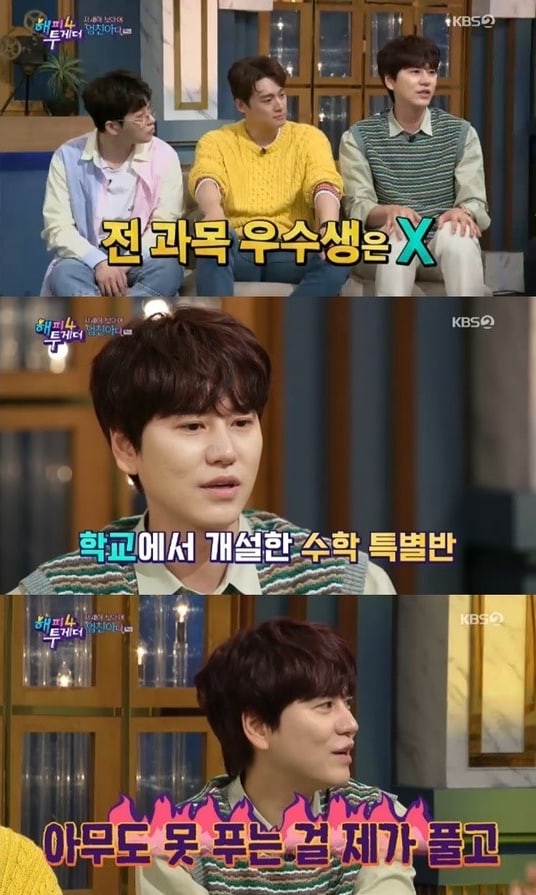 Super Junior
Happy Together
Kyuhyun
How does this article make you feel?