Mnet’s “Produce X 101” has found the person who released spoilers about the first rankings.

On June 16, Xportsnews reported that Mnet has found the person who released detailed spoilers about the first official rankings of the survival show. After the first rankings were filmed, a set of spoilers called the “Excel spoilers” was shared on an online community. The spoilers not only revealed the rankings of the top 60 contestants, but they also included details about their acceptance speeches and other special characteristics. When the episode of the rankings aired, people were shocked to learn that the spoilers were completely true.

The person who released the spoilers has now posted a handwritten apology after having their identity found by Mnet. The apology was posted with the title, “This is an apology for spoiling the first round of rankings for ‘Produce X 101.'” The post reads as follows:

Hello. I was a staff member during the “Produce X 101” incident.

First, I would like to sincerely apologize to the production staff and contestants, who have suffered great damages due to my wrongdoing.

I made a very big mistake by posting the rankings from the first ranking ceremony of “Produce X 101,” which was filmed at the CJ Ilsan studio on May 26, in the form of comments on this online café. I thought lightly of what results my actions would cause.

However, somebody collected screenshots of my comments, and an excel file of everything I said began spreading on various sites under the name “Excel Spoiler,” and after I was contacted about this fact by the company, I realized what I had done and how serious the problem was.

Despite signing a written oath promising to not release any information, I did not properly follow the content of the written oath, and I did not follow the advice of my co-workers who always told me to never talk to anyone about the results that I was seeing during the show’s recording. This is the result of my actions. I acted rashly. I have no excuses and this is my fault. I cannot turn back time, but if I were ever given the chance to go back, I would never repeat such a mistake again.

Once again, I wish to bow my head and sincerely apologize to the production staff, representatives, and contestants, who have suffered damages and were concerned by my actions. I am very sorry. 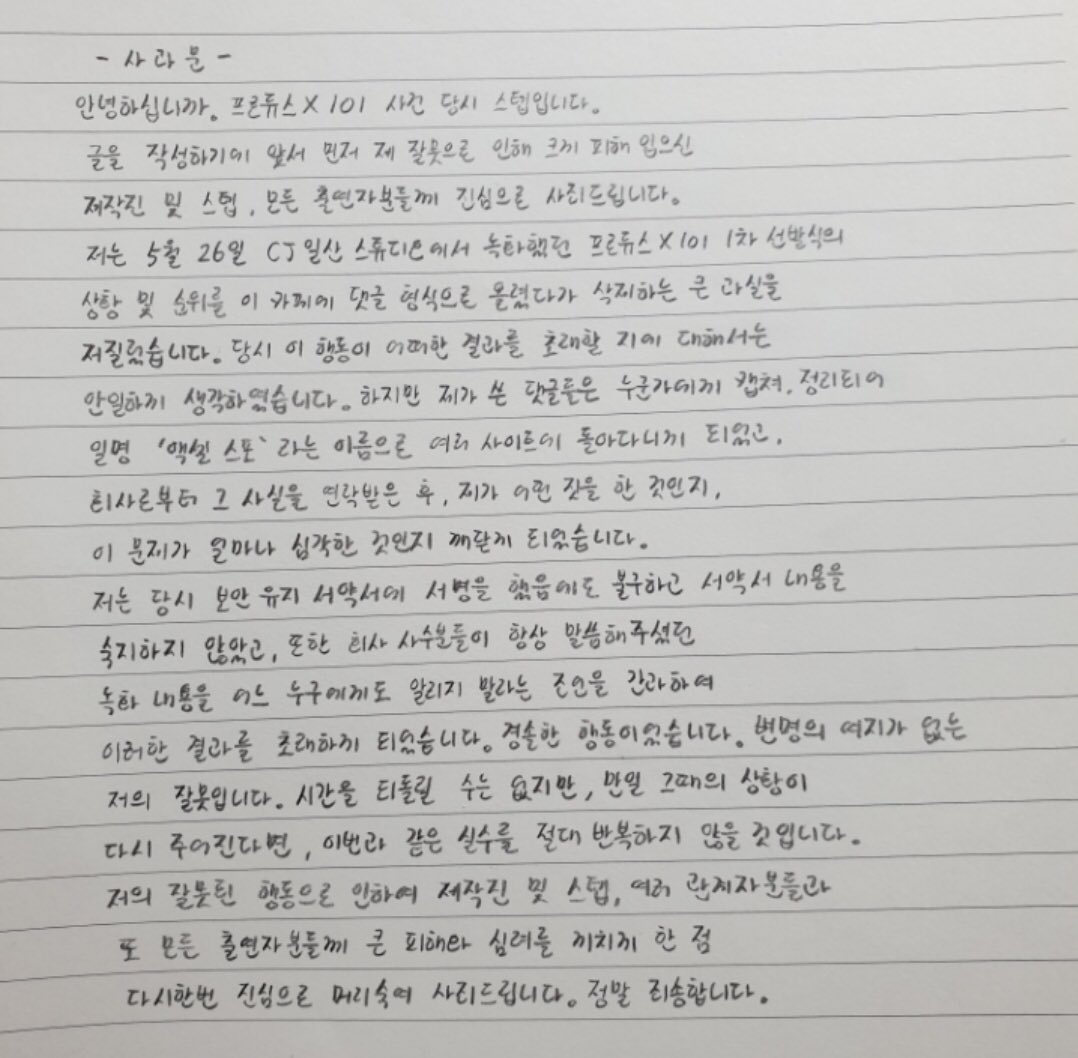 A source from Mnet stated, “In order to protect the rights of our viewers, we will continue to speak with our legal team and take strong action against those who spoil the content of our shows.”

They also added, “Countless staff members put in a lot of effort to create one show, and we hope there will be no more spoilers as they ruin the hard work that goes into each project,” and “The production staff will also be more cautious to ensure that no more spoilers are released.”