Watch: Girls’ Generation’s YoonA And Jo Jung Suk Are Put To The Test In New Trailer For Action Film

“E.X.I.T” will be a film that follows unemployed Yong Nam (played by Jo Jung Suk) and college club junior Eui Joo (played by YoonA) as they try to escape a city that’s been attacked by an unknown poisonous gas.

The new poster that was released on June 17 shows the two characters looking up in desperation. The tagline of the film reads, “If you want to live, run!” with the universal exit sign of a figure running out of a door next to the title. The two characters are wearing outfits made out of large trash bags, adding a comical element to a disaster movie. Jo Jung Suk is reaching out to a helicopter for help as YoonA looks up imploringly, showing their determination to get out of the situation. 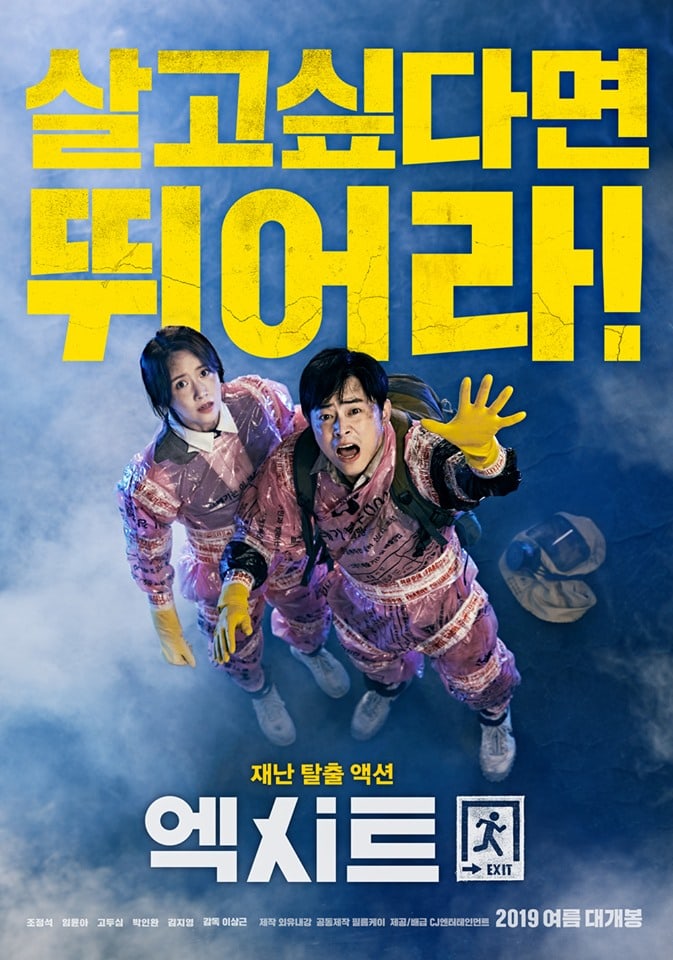 The film’s first trailer has been released as well, hinting at the fun and excitement the film is preparing to bring. Starting with the relatable line, “It isn’t just earthquakes and tsunamis that are disasters, our lives are disasters too!” Yong Nam fails in his job search yet again, and his mother talks about being ashamed to introduce her son to any potential blind dates because he’s unemployed.

Yong Nam bumps into Eui Joo, who he’s in a rock-climbing club with at school, at a 70th birthday party, and the screen reads, “Tired of searching for jobs, finding relationships, and enduring nagging, we now face a real disaster!” The battle begins as they try to escape a deadly gas that can kill a person in minutes. Yong Nam and Eui Joo tell everyone to get on the roof to escape the gas, and they put their rock-climbing skills to the test as they climb up buildings in a bid to survive.

“E.X.I.T” is set to premiere this summer.