“Watcher” will follow the story of Do Chi Kwang (Han Suk Kyu), a police officer who witnesses corruption, Kim Young Goon (Seo Kang Joon), a policeman who witnesses a murder, and Han Tae Joo (Kim Hyun Joo), a lawyer who witnesses a lie. They will team up to form the anti-corruption team that tries to uncover corruption within the police force and find out the hidden evils of the system. This psychological thriller with an interesting premise of police catching police will reveal the hidden sides to humans.

Ahn Gil Ho, a director famous for his detailed directing in dramas such as “The Secret Forest” and “Memories of the Alhambra,” will work in harmony with Han Sang Woon, a writer acclaimed for his detailed writing of the unique characters in “Good Wife,” to create a unique thriller about internal inspection. OCN is a channel that has expanded the scope of genres covered in Korean dramas through novel works of high quality. The fact that OCN is releasing a new psychological thriller is a hot issue among drama fans.

The main poster shows Han Suk Kyu, Seo Kang Joon, and Kim Hyun Joo sitting in the dark. They exchange keen, determined looks as if they are resolved to not miss even the slightest clue. The light that permeates through the cold air seems to hint at the weight that the anti-corruption team will carry as they dig up the truth and track down corrupt police. The phrase “Who watches the watcher?’ written above the three people who exude raw charisma raises expectations for a thriller that has never been seen before. 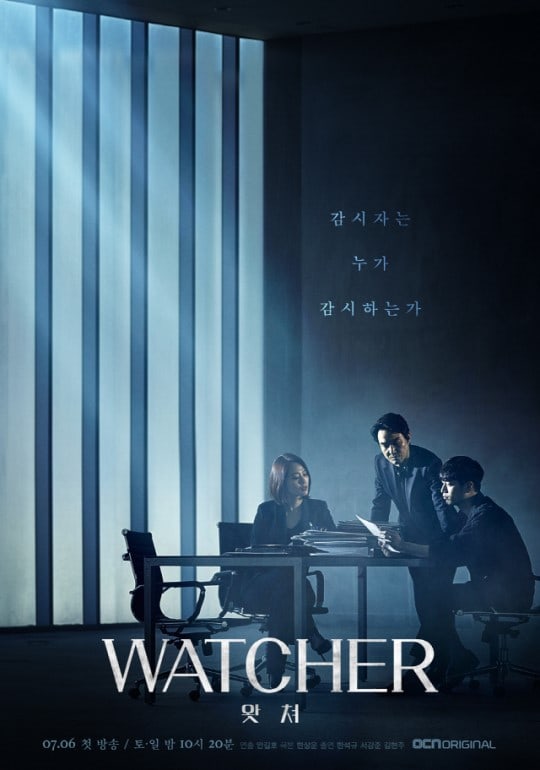 Unlike the existing investigation dramas that focus on solving cases, “Watcher” will deal with the various individuals entangled behind them. To catch criminals, the police stand at the crossroads of good and evil as well as the border between lawful investigation and corruption. The anti-corruption team will delve into various cases to approach the true form of power, and they will look into the desires of so-called “defenders of justice” to point out what good, evil, and justice are.

Expectations are already high on the truth the three characters will monitor and bring before our eyes after the inevitable fate brings them together.

The production crew stated, “The diverse human psychology will be portrayed in a meticulous and dense manner amid the detailed development of events. The synergy between Han Suk Kyu, Seo Kang Joon, and Kim Hyun Joo will surpass expectations and showcase a new world of psychological thrillers.”