The whistleblower case related to Yang Hyun Suk and B.I has been forwarded to the Supreme Public Prosecutors’ Office.

On June 18, KBS 1TV’s “News 9” reported on the development of the case regarding B.I’s suspicions of drug use and Yang Hyun Suk’s involvement.

The news program said, “Today, the Anti-Corruption and Civil Rights Commission referred the whistleblower case with allegations of YG’s drug investigations and suspicions of a cover-up to the Supreme Public Prosecutors’ Office.”

They continued, “There were three main things in the report sent to the Anti-Corruption and Civil Rights Commission at the beginning of this month: B.I’s drug use charges, suspicion of corruption between Yang Hyun Suk and the investigation office, and YG Entertainment’s systematic concealment of offenders.”

“News 9” added, “It looks like the key will be whether or not YG and Yang Hyun Suk actually covered up or interfered with the investigation of its agency’s artists.” 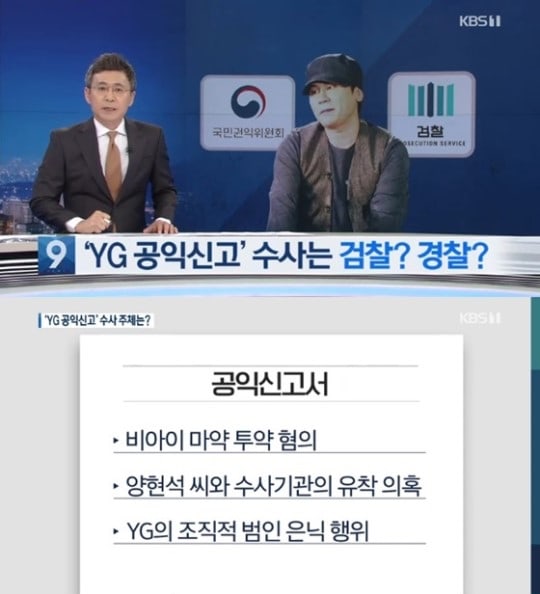 Bang Jung Hyun, the legal representative of informant “A,” said, “Looking closely at the records of the case at the time, there were circumstances that raised suspicions about the close relationship between YG Entertainment and the investigation office.”

“News 9” states that currently an investigation has been launched at the Gyeonggi Provincial Police Agency, and people are watching to see what choice the prosecutors will make.

B.I is under suspicion of taking and purchasing drugs in 2016. He left iKON after initial reports and YG Entertainment terminated its contract with the artist. It was then reported that Han Seo Hee was the informant “A” in the case, who has claimed they were coaxed and threatened by Yang Hyun Suk to change their testimony regarding B.I’s alleged drug use. Yang Hyun Suk denied these allegations, and announced he would be stepping down from his position at YG Entertainment.

iKON
B.I.
Yang Hyun Suk
How does this article make you feel?