VIXX’s Ken showed how honest and easy-going he is by openly sharing his past problems with dancing and his struggles with hair loss on MBC every1’s “Video Star”!

On the June 18 broadcast of the show, the idol featured alongside INFINITE’s Nam Woohyun, Nam Tae Hyun, and actress and former Fiestar member Linzy for the “Idol Devils” special.

Sandara Park opened the conversation by stating, “Ken knew that he was suited for musicals as soon as he started, but there was apparently a moment when he wanted to quit VIXX.”

Ken replied, “I am able to do musicals because of VIXX, but dance has been difficult for me even before I started musicals. When I was a trainee, I was constantly scolded by [fellow VIXX member] Leo because of my dancing.”

Kim Sook teased him, asking, “Are you saying you wanted to quit because of Leo?”

Ken joked, “There were times like that. Leo is known as the strict teacher among the VIXX members.” 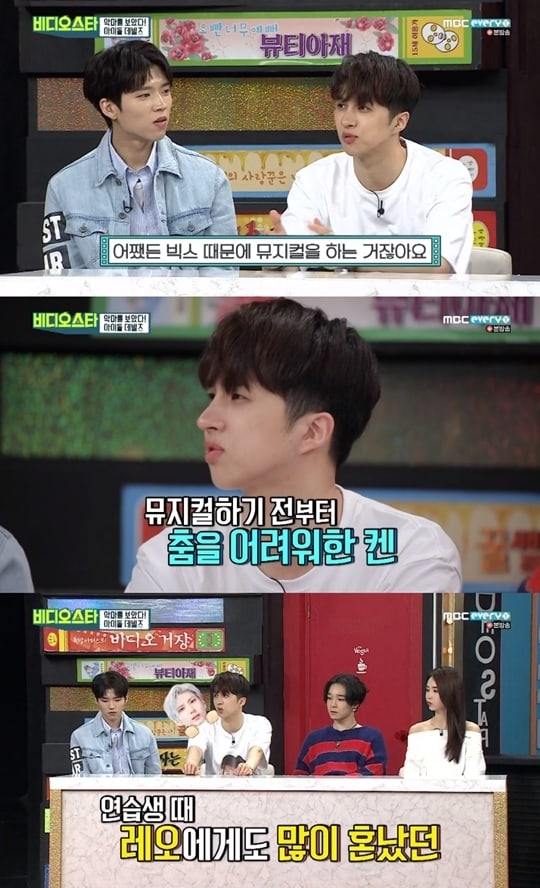 Kim Sook carried on by saying, “Ken is very honest. He confessed that he is experiencing hair loss.”

The MCs remarked that it seems like he has a lot of hair, and Ken elaborated, “I’ve fully recovered now, but when I get stressed, my hair tends to fall out easily. I fill in spots with spray treatments for musicals because of the lights.”

Ken then provided tips for anyone similarly dealing with hair loss. He stated, “You should take medicine before the problem gets serious. It makes your hair thicker, but if you take it after your hair falls out, it becomes useless because there’s no more hair. Besides that, finding small joys in life [is useful]. You shouldn’t get too stressed.”

He also continued to poke fun at his fellow members. When Kim Sook asked whether Ken’s hair improved because N entered the military and is not around to nag at him, he quipped, “That was a factor,” making everyone laugh.

VIXX
Ken (VIXX)
Video Star
How does this article make you feel?