On June 19 at 6 p.m. KST, the SM Entertainment group made a comeback with their new track “Zimzalabim” and mini album “The ReVe Festival: Day 1.”

That evening, #SayZimzalabim and Red Velvet trended worldwide as the group’s fans ReVeluv shared their reactions and celebrated their favorite parts of the MV! 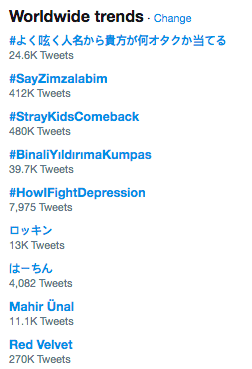 ReVeluv is living over how each member shines in the MV!

And the song itself is a bop that showcases the group’s vocals as well as delivers a showstopper dance break.

this is the best bridge to ever exist in a song #SayZimzalabim pic.twitter.com/DBjimjLM4K

zimzalabim sounds like it has 3 songs in it but what amazes me is that red velvet was able to pull it off and it didn’t sound messy.

the song takes you into a rollercoaster ride and it’s addictive too! #SayZimzalabim @RVsmtown

There are also some theories about the meanings of parts of the MV!

this scene with yeri making the rollercoaster go up… is it a reference to how yeri joined rv later on and making the group more and more successful.. if it is i’m really crying ? #SayZimzalabim #RedVelvet @RVsmtown pic.twitter.com/cpthND4qxS

quick theory: looks like red velvet is on a tour for this album series and their “day 1” is going to a theme park = zimzalabim.

the van could serve as a clue that they’re on a tour and it’ll take them to different places for day 1, day 2 and the finale!#SayZimzalabim @RVsmtown pic.twitter.com/v70zmVRSzu

And fans have spotted some parallels with the group’s previous videos.

yeri with her unicorn in the bad boy mv vs. in the zimzalabim mv ?#SayZimzalabim #RedVelvet pic.twitter.com/PzqmtUI0Kx

Just imagine thousands of Luvies chanting zimzalabim together in a Red Velvet concert. I mean if that's not cult culture, I don't know what is.

There’s so much to love about Red Velvet’s new MV! What’s your favorite part?