On the June 19 episode of MBC every1’s “Weekly Idol,” ATEEZ and ONEUS appeared as guests!

The episode used the concept of having a university orientation, and each group started by introducing themselves and performing their new tracks.

Different from their usual bright selves, ONEUS showed off a charismatic performance of “Twilight,” while ATEEZ performed “Wave,” their refreshing song with powerful choreography.

In a corner where they could share and brag about good news, ATEEZ revealed, “Our dorm is around 238 square meters. It’s large so we can comfortably share rooms in pairs. Also, we have air purifiers in every room.” ONEUS shared, “We recently got a new car. It’s big enough that Hwan Woong can stand up and comfortably change.” 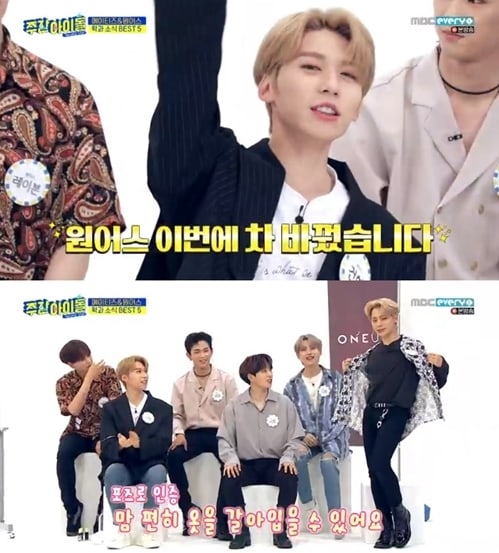 ONEUS’ Shi On continued on saying, “We have no limit on how much money we spend on food. We even went to Italy and ate T-bone steaks without worrying.” Hwan Woong also chimed in stating, “The boss personally came out and cut up the steaks for us.” 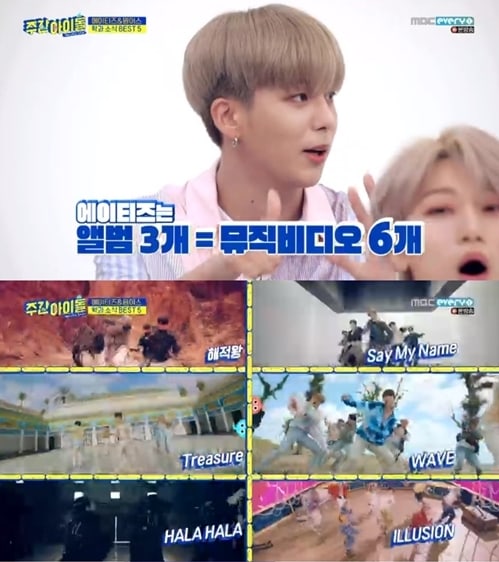 ONEUS added, “Our company has a cafe where they sell cotton candy.” The three MCs hilariously responded, “We thought you would mention your album, but instead you’re talking about cotton candy!” The MCs probed for more answers, asking, “Is it free for those who work at the company?” with the group responding, “It’s half price.”

Jo Se Ho continued to ask, “If we go, do we have to pay for it?” to which Gun Hee confidently responded, “I’ll buy it. I’m Lee Gun Hee after all.”

They moved on to performing their personal talents, and each group did impersonations. ATEEZ’s Jung Yoon Ho imitated Spongebob, while ONEUS’s Gun Hee did Doraemon. Gun Hee followed up by revealing his extra long toes, showing everyone that he can rip open a bag of chips with them.

Each group also performed covers of their company seniors’ music. ATEEZ is from KQ Entertainment, which manages Seven Seasons Entertainment, the home of Block B. The group performed “Very Good,” and shared that Block B’s P.O had given them kind words, saying, “I believe in you guys. Work hard.” ONEUS is under RBW Entertainment with MAMAMOO, and performed “Yes I Am.” They also explained, “MAMAMOO members heard our new song first and were so excited because they liked it so much. Moonbyul even gave us tanghulu (candied fruit).”

Lastly, the groups participated in a corner where they had to open a box atop a pole by throwing bean bags at it. The first group to break theirs open was ATEEZ, who received one minute for a PR video as their reward. They quickly said, “We have come back with a super refreshing song for the summer. Please give lots of love to ‘Wave’ and ‘Illusion,’ as well as the rest of the album, as those songs are good too. Lastly, please give both ATEEZ and ONEUS lots of love!” 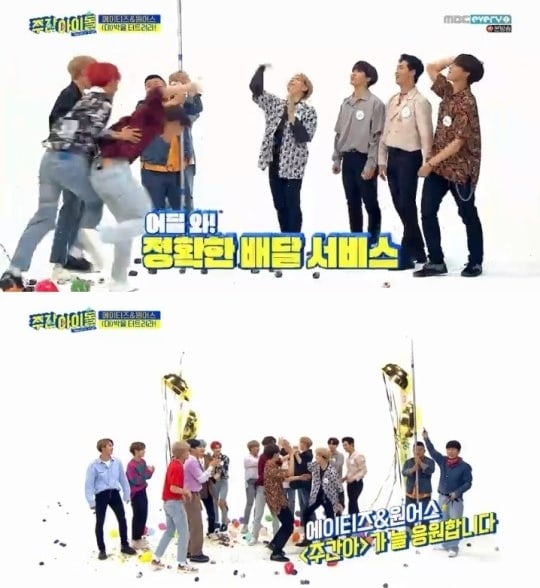 Weekly Idol
ONEUS
ATEEZ
How does this article make you feel?