“Arthdal Chronicles” tells the fateful story of heroes who write their own legends in the ancient land of Arth. The upcoming June 22 episode marks the beginning of part two, titled “Turning Sky, Rising Ground.” Part one was titled “Children of the Prophecy” and ended off with shocking revelations like the existence of Eun Seom’s twin brother Sa Ya (both played by Song Joong Ki), as well as the fact that Ta Gon (played by Jang Dong Gun) is also half human, half neanderthal, like Eun Seom. Part two aims to focus on different characters, present a deeper plot, and unfold a stronger storyline.

The main cast of Jang Dong Gun, Kim Ji Won, Kim Ok Bin, and Song Joong Ki with two roles, are fiercely shown off in the new main poster for part two, and looks to promise an even more exciting second half. 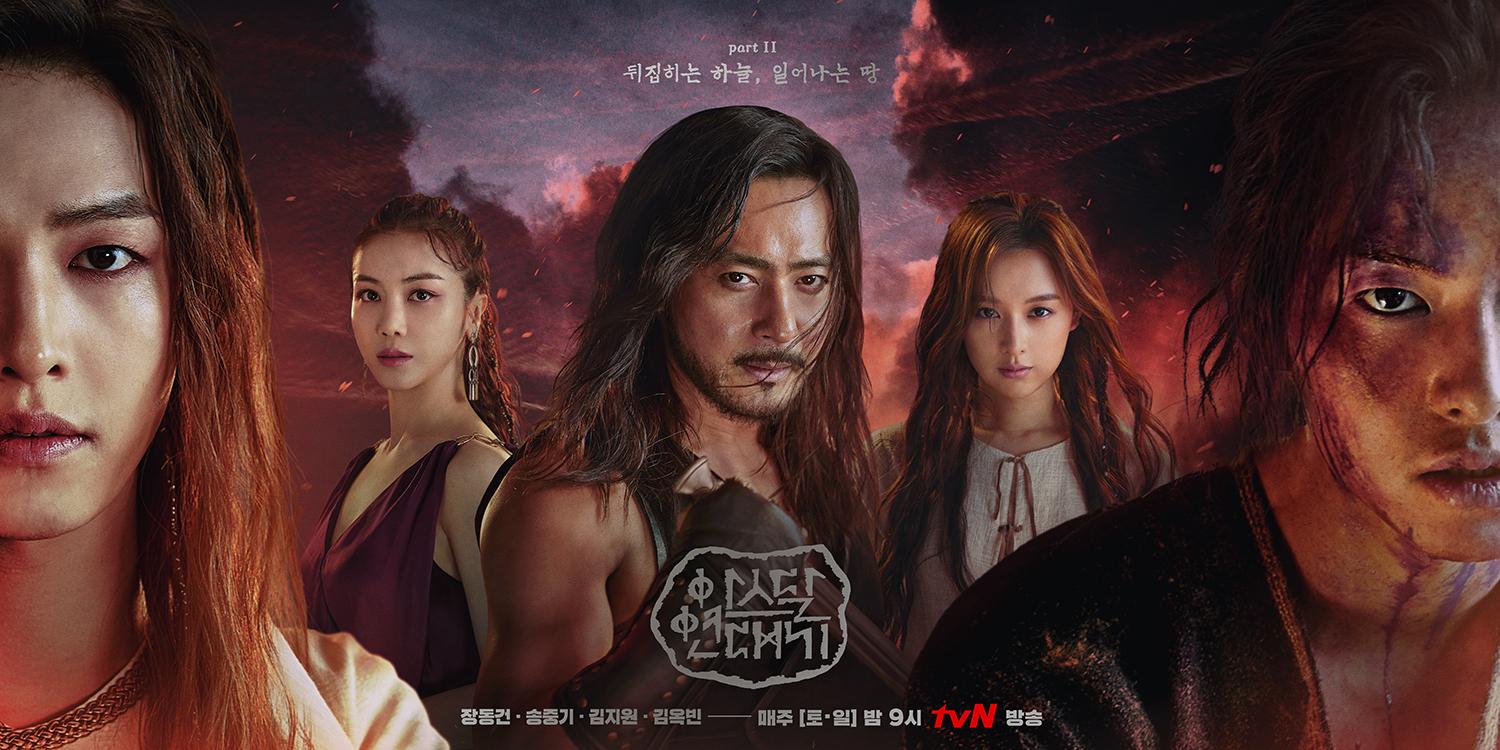 Song Joong Ki is currently impressing with his complete transformation as Eun Seom’s twin Sa Ya. He was brought by Ta Gon and secretly raised by Taeilha (played by Kim Ok Bin). Despite his crisp white outfit, long hair, and fair skin, Sa Ya’s softness gives him a mysterious vibe. On the other hand, Eun Seom, who has come to Arth to save the Wahan Tribe, drips purple blood and intensely stares with a tough expression. Their contrasting appearances seem to preview their contrasting fates.

In the middle of the poster is Jang Dong Gun, who is the strategist Ta Gon, fighting to one day have Arthdal as his own. He sets the powerful tone for the whole poster as he looks ready for battle. Although he is someone aggressive enough to kill his own father, San Woong (played by Kim Eui Sung), without hesitation, Ta Gon in the second half presents a new weakness once his real identity is revealed to Eun Seom.

Although donning a wreath in the poster for part one, Tan Ya (played by Kim Ji Won), the guardian and shaman of the Wahan Tribe, now wears the same outfit as the people of Arth. Her determination shows through her pursed lips and fierce gaze. Taeilha wears an exquisite outfit and is nicely dressed up as the daughter of a tribal leader. While she appears cold, her eyes are still full of ambition.

The producers shared, “The poster for part two of ‘Arthdal Chronicles’ holds the individual storylines of all five main characters, including Sa Ya, who was surrounded by shock and curiosity as soon as he appeared. Please look forward to the exciting new stories of ambitious Eun Seom, Sa Ya, and Tan Ya, as well as Ta Gon and Taeilha, who both aspire to rule Arth.”