After AB6IX’s appearance, Kyuhyun introduced EXO’s Chen, saying, “The person that we’ll invite onto the stage is someone to whom I’m very grateful, who came to visit me when I’m feeling nervous. He’s in a group that represents Hallyu [the Korean wave} and is also a rising OST star. This spring, he showed a different side of himself as a ballad singer through his first solo album. Come to think of it, he appears to be following in my footsteps.”

Chen then made his way onto the stage, and the two SM Entertainment labelmates warmly greeted each other. When asked what he’d been up to, Chen replied, “I successfully completed EXO-CBX’s tour in Japan, released the track ‘May We Bye,” opened a YouTube channel, and have been uploading cover songs. I created the channel hoping that people would find it a source of healing and comfort.” Kyuhyun commented, “I’m enjoying watching your videos,” and he jokingly asked Chen to cover his latest solo track “Aewol-ri” as well.

Speaking about his solo debut earlier this year, Chen said, “I thought that now was the right time, so I spoke to the agency. Kyuhyun cheered me on, saying, ‘You’re going to do great.””

Kyuhyun suggested that they play a game in which they had to guess a song after listening to just one second of its intro. Kyuhyun correctly guessed that the first song was Tim’s “I Love You,” and the two labelmates went on to sing a brief duet of the song together. After hearing Chen sing, Kyuhyun was moved by his voice and told him, “I love you.”

Chen then correctly guessed both IU’s “Through the Night” and Paul Kim’s “Every Day, Every Moment.” After he sang brief covers of both ballads, Kyuhyun said, “I’ll give you the title of ‘ballad king.’ I think you’re on the same level as Shin Seung Hoon,” and Chen humbly protested. The two singers concluded the segment by singing a duet version of Chen’s solo title track “Beautiful Goodbye.” 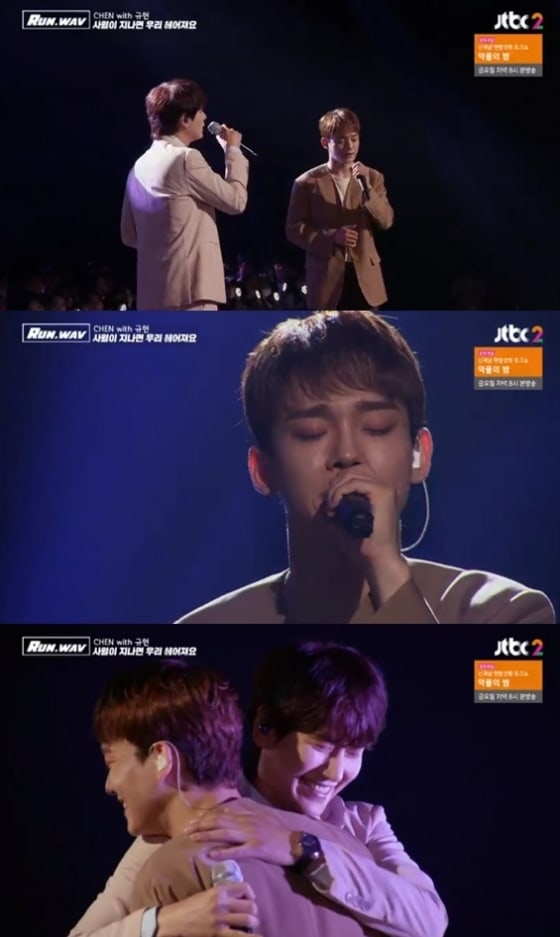 EXO
Super Junior
Kyuhyun
Chen
Run.wav
How does this article make you feel?