In the teaser, informants with altered voices revealed, “It seemed as if they did everything the investors wanted” and “This incident is so famous because people who work in Gangnam’s adult entertainment establishment went shopping as a large group and he [Jho Low] did that for them.”

The show added, “We obtained a tip that there was prostitution mediation on the day [Jho Low] entered the country and investigated the whereabouts of the wealthy Southeast Asian businessmen at the time. A month after that suspicious drinking party, about 10 of Madam Jung’s women went on an ultra-luxurious trip to Europe where Jho Low was staying. We obtained information on instances when a YG Entertainment employee and wealthy Southeast Asian businessmen continuously met.”

A source from “Straight” explained, “In October 2014, about 10 women led by Madam Jung went to France at the invitation of wealthy Malaysian businessman Jho Low. This happened a month after Jho Low’s party, Madam Jung, and Yang Hyun Suk secretly met at Madam Jung’s luxurious adult entertainment establishment. The women were approved for a one-week stay in Europe for the overseas business trip, agreed to be paid 10 million to 20 million won (approximately $8,649 to $17,298) and went abroad. They stayed at an ultra-luxurious yacht and spent the nights in rooms with Jho Low and his party.”

“Straight” obtained testimony that the Europe trip with prostitution mediation was organized through a YG employee. They also had additional testimony that Jho Low’s party contacted an employee at YG Entertainment and not Madam Jung when problems occurred during the women’s trip in Europe.

A source from “Straight” said, “The reason why YG took secret and special care of the Southeast Asian businessmen is related to YG’s business diversification that YG was pushing in the Southeast Asian region at the time of BIGBANG’s military enlistment.” 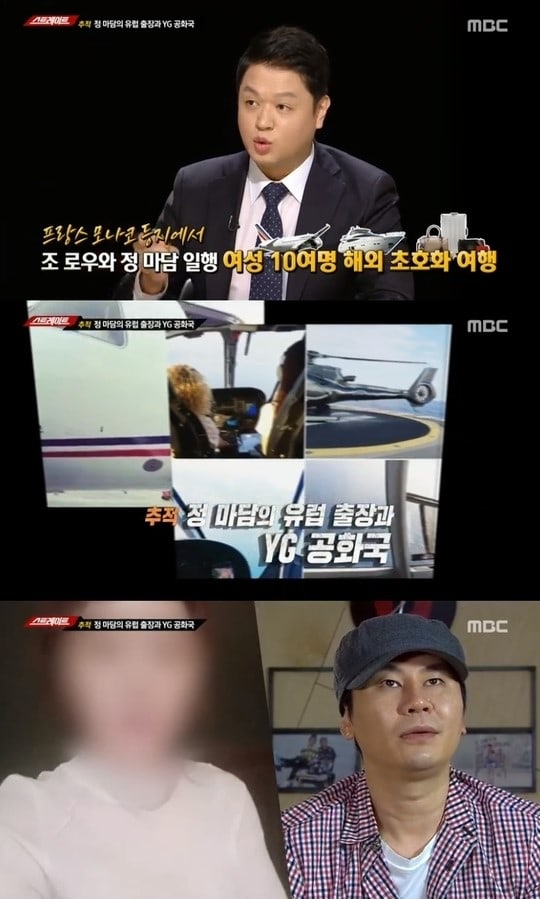 After the teaser was released, a source from YG Entertainment denied the claims, saying, “Nothing has changed from the statement we recently released.” In May, “Straight” aired an episode about Yang Hyun Suk and high-ranking employees of YG Entertainment who were involved in soliciting prostitutes for Jho Low. At the time, Jho Low’s spokesperson, Yang Hyun Suk, and PSY all denied these allegations.

During the June 24 broadcast, “Straight” refuted the statements released by PSY and Yang Hyun Suk following the May episode.

In May, PSY stated that he and Yang Hyun Suk were the first ones to leave after drinking and eating with others. “Straight,” however, stated that their strange meeting with Jho Low began a day before this dinner.

In September 2014, Jho Low, Madam Jung, and 25 employees from her adult entertainment establishment had dinner at a famous restaurant in Gangnam. One witness said, “Yang Hyun Suk gave instructions. During the second round at the adult entertainment establishment, Jho Low sat at the head of the table in the center, and PSY and Hwang Ha Na sat around him near the door. Yang Hyun Suk sat on the other side near the bathroom. A part of Jho Low’s party headed to a hotel and the person who booked the hotel was an employee of YG Entertainment.”

The police are currently investigating Madam Jung. “Straight” tried to get in touch with Madam Jung but failed to get a comment. Meanwhile, Yang Hyun Suk responded, “I’m not going to answer because I’ve finished giving my statement and evidence through the police investigation.” 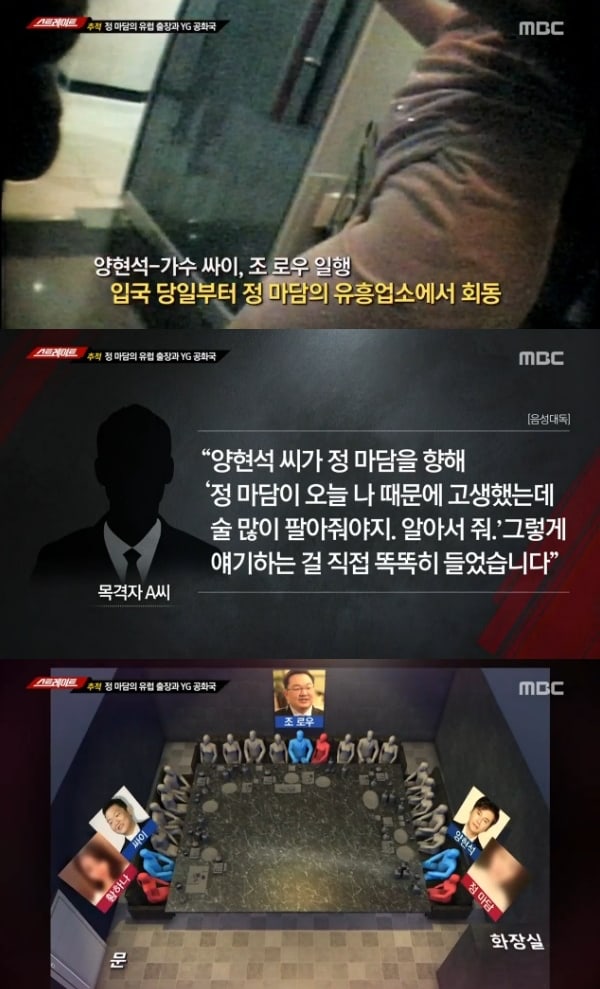 About a month after Jho Low and Yang Hyun Suk’s meeting, 10 women from Madam Jung’s adult entertainment establishment went to Europe. The women each received around 10 million to 20 million won (approximately $8,649 to $17,298). The women rode Jho Low’s private jet, landed on his ultra-luxurious jet, and enjoyed shopping at luxury brand stores.

People who participated in the trip claimed that the prostitution mediation was organized by a YG employee. Despite many attempts to check to see if this situation was connected to a YG employee, “Straight” was unable to get an answer from the agency.

Jho Low is a businessman who has close ties to the former Malaysian Prime Minister and is currently wanted by the Interpol for allegations of pocketing 5 trillion 300 billion won (approximately $4.6 billion) through a state-operated investment business. The U.S. and Malaysian police are currently confiscating assets illegally obtained by Jho Low which includes a yacht that costs 260 billion won (approximately $225 million).

About YG’s push for entering the food business, a source from YG Entertainment explained, “The profit that BIGBANG members earned in Korea and abroad made up to about 80 percent of YG’s total performance profit. Because BIGBANG’s profits were directly linked to the company’s business index, BIGBANG was the most important entity to YG that was listed on the stock market. Yang Hyun Suk contemplated deeply about how to increase profit after BIGBANG’s military enlistment and was preparing business diversification. I understand that he looked at Asian countries with high idol brand popularity in particular.”

The staff of “Spotlight” explained, “Thailand’s Show DC Shopping Mall opened in spring of 2017. YG had opened various businesses here,” and added that this occurred around the same time as BIGBANG’s military enlistment.

After a year or two of taking good care of wealthy Thai businessman Bob (also known as Chavanos Rattakul) and Malaysian businessman Jho Low, YG Foods succeeded at entering the market in countries such as Thailand and Malaysia. About this, Yang Hyun Suk said, “I understand that the internal investigation will be concluded without charges in connection to the [prostitution] mediation.” 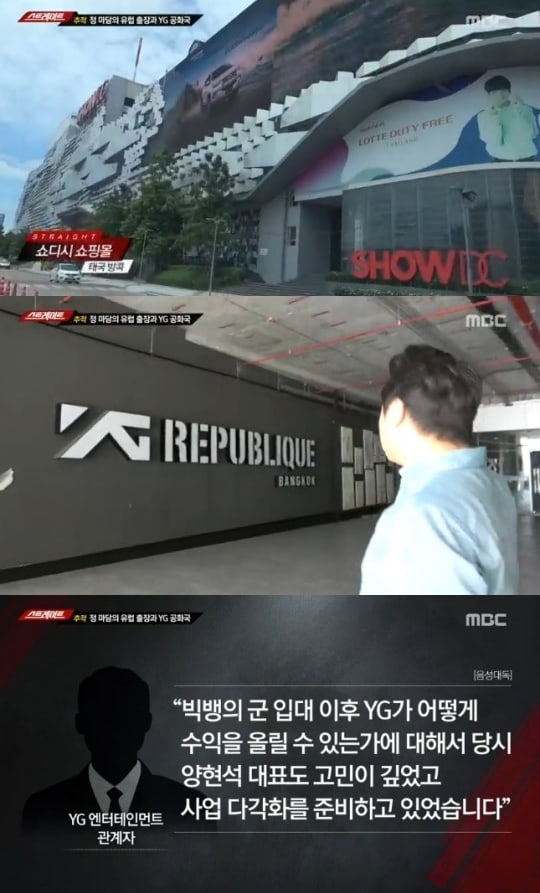 On June 24, MBC’s “News Desk” also reported on the new allegations brought forth by “Straight” and questioned PSY’s previous statement that he had only gone out to the dinner to introduce Jho Low to Yang Hyun Suk and that he had only met the businessman once on the day after he entered the country. 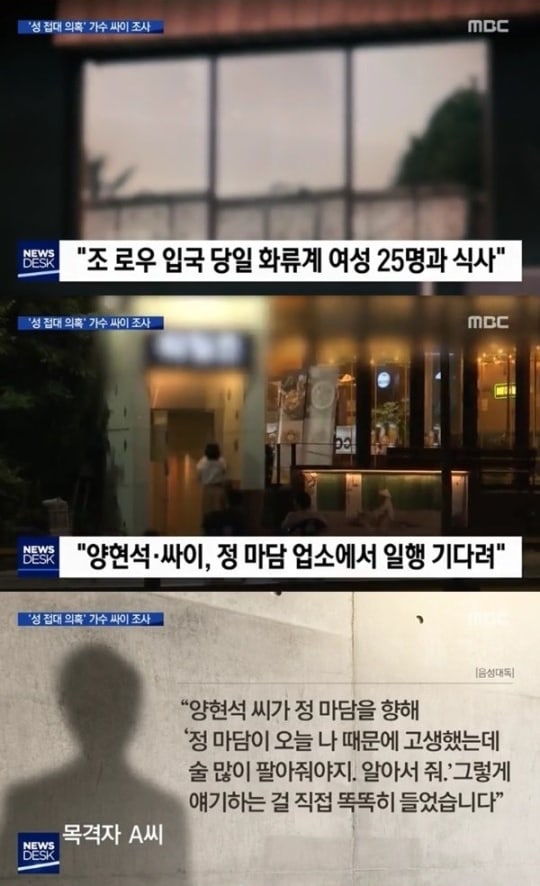 The news program continued to report that women from Madam Jung’s establishment were paid to travel to Europe on a business trip that was organized by a YG employee.” In an interview with “Newsdesk,” a woman who went on the trip said, “There’s a girl who goes by the name (censored) in the adult entertainment establishment and I remember she was Jho Low’s partner. At the Europe trip, Jho Low bought her luxury goods worth hundreds of millions of won.” 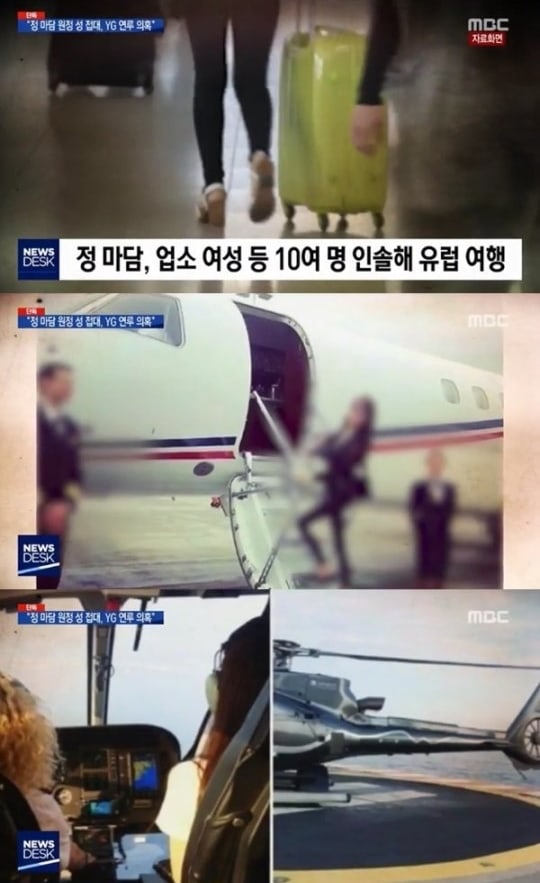 The participants of the trip said that Jho Low told a YG employee about inviting women, and this employee cast women through Madam Jung. A source from “News Desk” said, “We obtained testimony that when conflict arose about money the women would receive, a source from Jho Low brought up the issue with a YG employee and not the guide Madam Jung. This is the part that supports the possibility of YG’s involvement.”

In response, YG Entertainment reportedly did not respond to “News Desk” when it was confirming details. 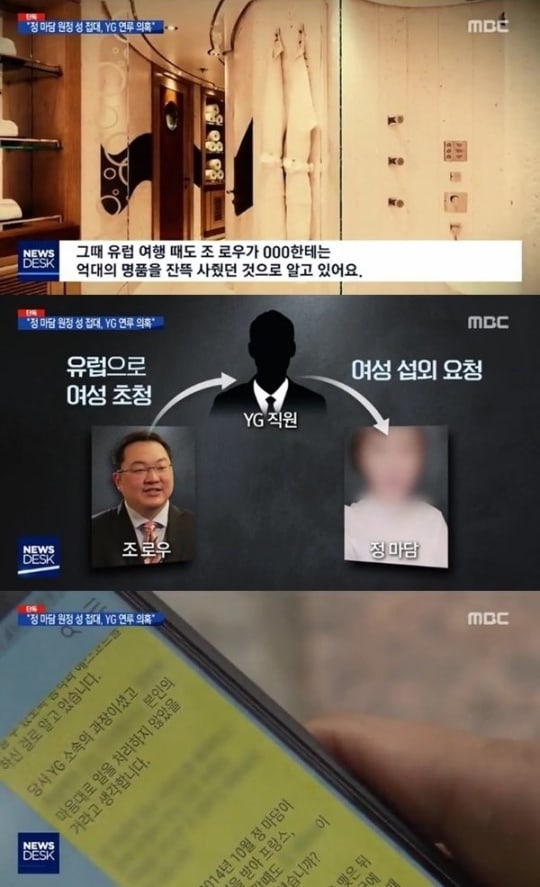