Kang Ho Dong began, “She went on a blind date with one of our members. And she still agreed to come on the show.” He asked, “Have you met one of the members personally?” to which she replied, “If you’re asking if I’ve grabbed a meal [with an ‘Ask Us Anything’] member personally, then yes.”

Revealing himself to be the person in question, Kim Heechul suddenly asked, “Hey, do you still live in Gwacheon?” Kang Ji Young explained, “We saw each other with [announcer] Jang Sung Kyu.” Jun Hyun Moo made everyone laugh by asking, “Is Jang Sung Kyu the matchmaker?”

Kim Heechul continued, “It wasn’t like we dated and broke up,” and Kang Ji Young added, “We just ate a meal together once. I met Kim Heechul for the first time at the team dinner for ‘Code.’ He took full control of the atmosphere. I thought, ‘He’s no ordinary person,’ and ‘You have to be able to control the atmosphere if you’re a celebrity.'”

When asked if she had feelings for him, the announcer replied, “I thought that he was someone I shouldn’t be associated with.” Kim Heechul then surprised her, saying, “Is it okay for me to reveal our text messages?” 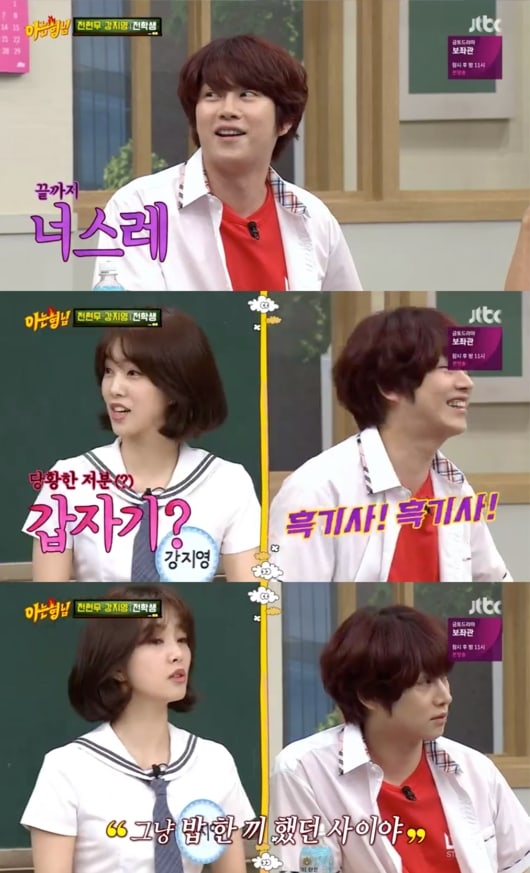