“A-TEEN 2” has come to a successful end!

The Playlist Studio web drama, which recently ended, has surpassed 52 million views on Naver’s V Live alone, achieving the highest record for a V Original web drama series. With the release of the web drama, the number of subscribers to Playlist Studio’s V Live channel grew by 35 percent.

The first episode of “A-TEEN 2” has the highest number of views of all V Original web drama videos in 2019, nearing 5 million views. In addition, each episode has led to a heated response with almost every episode exceeding 2 million views on V Live. 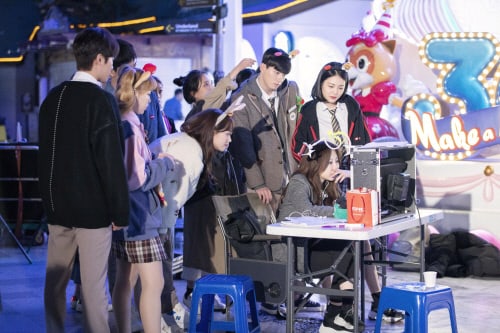 Following the conclusion of the drama, producing director (PD) Han Soo Ji sat down for an interview to talk about various aspects of the series. She expressed her bittersweet feelings about the ending and thanked the staff and crew for working hard.

When asked about the secret to the series’ success, she shared, “There are many reasons like the good actors and OST, but in the central story, each character has its own distinctness and each of their own worries. Viewers can empathize with a character who has similar worries, and it is also fun to see the points at which the characters’ worries clash. I think it is different from other school web dramas because it doesn’t just deal with romance.”

Many stars were born due to the success of “A-TEEN,” and Han Soo Ji talked about how she cast the actors. She revealed, “I thought actors who are first greeting the viewers through our characters could increase the level of imersion rather than actors who are well-known, so it was very difficult as I searched for new faces. Since we filmed for almost three months, the hardest part was to find actors who could be with us for this long period of time. Many people know the name ‘A-TEEN’ now, but it wasn’t easy when we first planned first season. Also, Do Ha Na and Kim Ha Na’s images that were created in the planning stage were very clear so it was a priority to find actors who synchronize well [with the characters].”

Han Soo Ji continued, “Both Shin Ye Eun and [APRIL’s] Lee Naeun auditioned for both the Kim Ha Na and Do Ha Na characters. When I first saw Shin Ye Eun, she had long hair. Do Ha Na originally has a bit of a strong image, so there was a new kind of charm in seeing someone with an innocent look like Shin Ye Eun play a chic [character]. After she was confirmed for the role, she cut her hair short. When Lee Naeun acted out Kim Ha Na, who in some ways can be seen as a simple villain, she had the charm of increasing sympathy for her character.”

When asked potential for a third season, Han Soo Ji answered, “There is nothing in discussion yet. First of all, I am very happy that the teen stories of ‘A-TEEN’ have concluded well.”