The July 2 episode was a “Reply 2009! The girls we loved” special featuring Park Bom of 2NE1, Yubin of Wonder Girls, Jenyer (Jeon Jiyoon) of 4Minute, and Song Ji Eun of Secret. MC Sandara Park of 2NE1 also joined in their discussion.

During one segment of the show, the guests were able to answer questions anonymously by pressing a button, and only the number of “Yes” answers would be revealed rather than their names. This led to a lot of funny reactions from the idols as they were surprised by the number of positive answers to the statements.

When asking them how celebrities ask each other out, the hosts assured the guests that they knew their answers wouldn’t be personal stories but rather things they heard from others, which allowed them to be candid.

Yubin said, “They find out the other person’s number and send a text message like, ‘I’m your fan. I’m cheering for you.’ or ‘I want to get close to you.'” Park Bom added that she’s heard celebrities meet on variety and music shows. She explained they talk after meeting on shows and later call the person they have an interest in.

“I hear it’s different for celebrities as you work longer in the industry,” revealed Sandara Park. “If one person has a car, they pick you up and you enjoy a date in the car. If you live alone, you meet up at home. You can also go on a hike at 12 a.m. in the summer after buying chicken and get drenched in sweat. I hear there are no people around.”

Jenyer then chose the hallways of music show dressing rooms and the spot in front of vending machines as “hot places” for dating. She explained, “There’s a place there where you can’t be seen. There’s a staircase there and I saw [couples on dates] a few times there while going to the bathroom. There are people there who are brave.”

“I also went out to go to the bathroom,” said Song Ji Eun. “You can just say hi and wave, but there are some [idols] who do high fives. Instead of just a touch, they hold hands then walk by. You don’t [interlace fingers] between friends so I thought that those [idols] are having a fling.”

Sandara Park made everyone laugh by adding, “You know the dressing rooms right before going on stage at ‘Inkigayo?’ A lot of looks are exchanged there. Everyone’s gathered there and things always seem to start there because everyone has to gather for the greeting at the end.”

Jenyer added, “Around the time of my debut, a celebrity asked me out and we dated. But while we dated, he cheated on me with multiple people. He was dating three people besides me.” 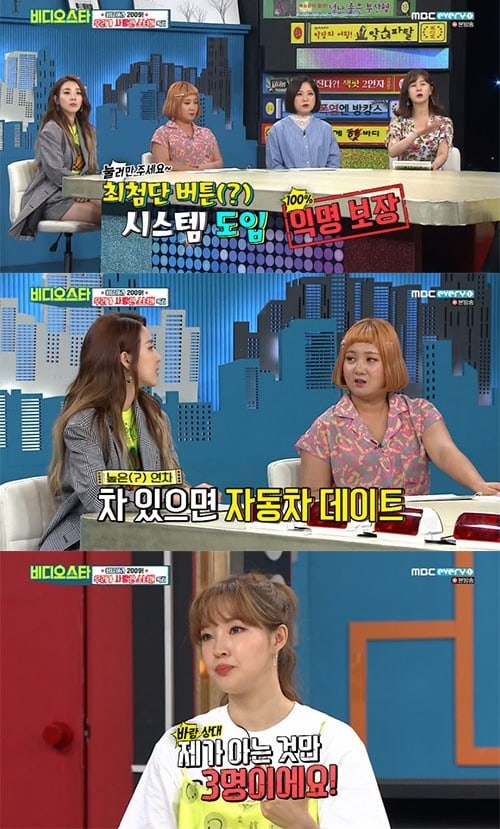