The Top 31 contestants of “Produce X 101” took to the stage for the concept evaluation!

On the July 5 episode of the Mnet survival show, the trainees performed original songs in five teams for a studio audience. The trainees who came in first place on each team received a benefit that multiplied the votes from the audience by 500.

The team with the most votes took first and received a benefit of 200,000 points divided between the members, with the first place trainee receiving 100,000 points and remaining members receiving 20,000 each.

The team with the most votes overall was the “U Got It” team, meaning they received the 200,000 benefit points spread out amongst their members, and Kim Yo Han came in first in the team.

With only several hours left in the current round of online voting, “Produce X 101” just revealed that the current contestant in the No. 1 spot has the family name Kim. When the rankings were most recently announced (at the second ranking ceremony), UP10TION’s Kim Woo Seok was in No. 1, with Kim Yo Han in No. 3.

Online votes and benefit points from the concept evaluation will be added together to determine the ranking at next week’s third ranking ceremony. 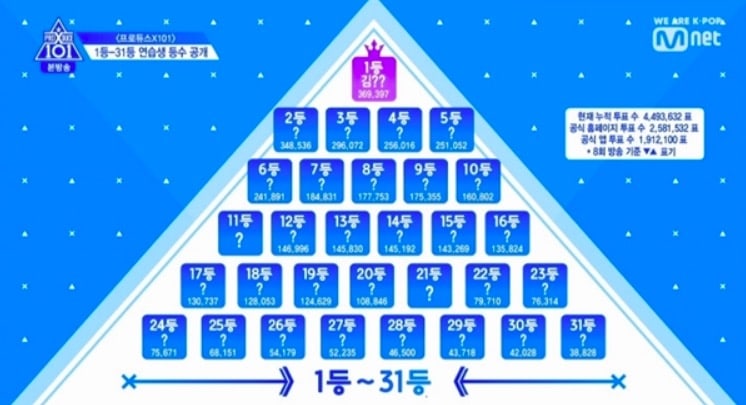 Who are you rooting for on “Produce X 101”? Show your support for your favorites by voting in Soompi’s international prediction polls here!