I.O.I’s Kim So Hye surprised some of the trainees of “Produce X 101” and shared her advice for them!

Kim So Hye took part in the first season of “Produce 101” and won a spot in the final project group that promoted together as I.O.I.

On the July 5 episode of “Produce X 101,” the team of trainees preparing to perform the song “Super Special Girl” together went to a cafe and talked about their feelings ahead of their performance. Kim So Hye then entered the cafe, giving many of them a big shock. It turned out that trainee Park Sun Ho had invited her, and the pair know each other because they acted together in the drama “The Best Chicken.” 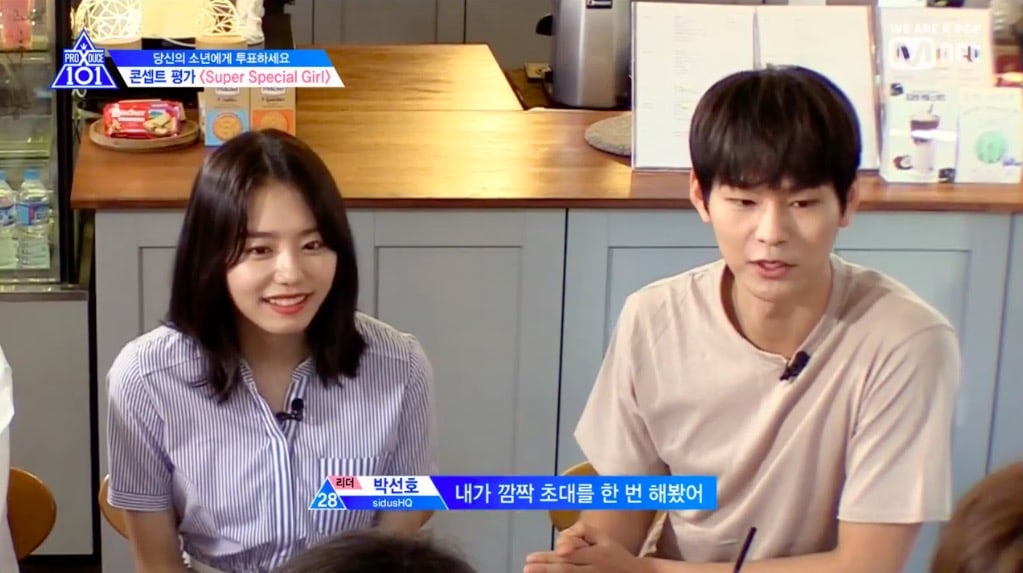 Park Sun Ho said in his interview, “She’s upbeat and energetic, and I hoped we could get some positive energy from her.”

Kim So Hye mentioned that she’d only seen most of them on television and not in real life, and MYTEEN’s Song Yu Vin asked if she’s watching “Produce X 101.” She showed that she’s a fan by remarking on how Song Yu Vin and Choi Su Hwan are always on the same team, making them laugh.

Park Sun Ho asked Kim So Hye to share difficult moments from “Produce 101.” Kim So Hye said, “I did feel a kind of pressure. I felt pressure over whether I’d be able to show myself doing well to the people who were supporting me.”

Kim Si Hun asked her how she overcame that, and she said, “I just kept practicing. If I practiced for one day, the next day it would have improved a bit. So I’d practice for a day, and if it was a bit improved the next day, then I’d practice a bit more.”

Kim So Hye’s team took first place in the concept evaluation during her season, and Kang Hyeon Su asked if their teamwork had been good. “Yes, our atmosphere was great,” she said. “I think you need to have a good atmosphere between the team members.”

Meanwhile, I.O.I is currently gearing up for a reunion with nine members.

Watch Park Sun Ho and Kim So Hye in “The Best Chicken” below!

Park Sun Ho
Kim So Hye
Produce X 101
How does this article make you feel?