Despite being an awkward accident-prone robot, Zero Nine (Yeo Jin Goo) pours his heart into expressing his love. Here are the seven steps he’s taken to develop his relationship with Uhm Da Da (Girl’s Day’s Minah).

With the ability to run at 120 kilometers (approximately 74.6 miles) per hour and a sturdiness that allows him to be completely fine after getting pierced by a steel bar, Zero Nine used his many strengths to continuously chase after Uhm Da Da. Having yet to understand that love involves giving in sometimes, he simply ran to her to express his love no matter what and caused Uhm Da Da to become dumbfounded most of the time.

After getting scolded for accidentally almost throwing out a record player that holds special meaning to Uhm Da Da, Zero Nine worked hard to learn about Uhm Da Da’s past and her thoughts. By carefully listening to Uhm Da Da’s words and exploring the clothes she brought him, he got a better understanding of Uhm Da Da’s preferences.

Stage 3: “Sacrificing my shoulder for my girlfriend”

In order to deliver to Uhm Da Da something she needed desperately, Zero Nine stopped at nothing—not even a truck running into his shoulder—and used his entire strength to run to the filming set. Believing that doing everything Uhm Da Da wants is the best way to express his love, he goes so far as to sacrifice his body to help her.

Right before Zero Nine’s “one-week lover trial mode” came to an end, he asked Uhm Da Da again for the last time if she really wanted to end everything. Having been hurt by love in the past, Uhm Da Da hesitated. Zero Nine took that as a rejection and weakly let her go while trying hard to smile. 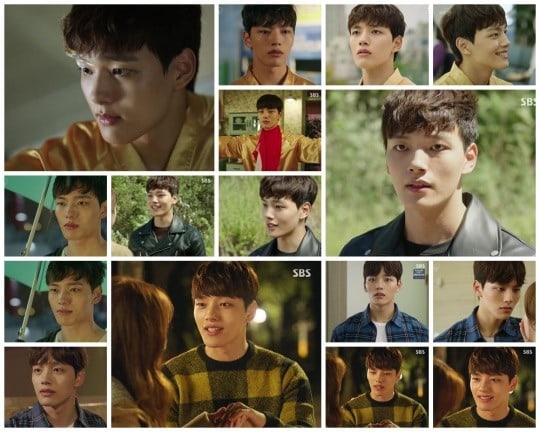 Stage 5: “I want to make my girlfriend happy!”

Once the official dating mode began, Zero Nine started to understand Uhm Da Da’s emotions better. In particular, Zero Nine put a lot of effort into cheering up Uhm Da Da, who became sad after seeing the location her long-time ex-boyfriend Ma Wang Joon (Hong Jong Hyun) proposed to her at. Eventually, operating a closed down amusement park for her, he flamboyantly expressed his love for Uhm Da Da.

Instead of being the one that gives love all the time, Zero Nine began wanting to receive affection from Uhm Da Da as well. Seeing Uhm Da Da with other male coworkers, Zero Nine got jealous and asked her to kiss him. He went into “affection pleading mode,” which hadn’t been programmed into him.

Stage 7: “Although I’m a robot, I’m going to love enthusiastically”

In episode 26, Zero Nine was concerned that he may not be able to completely love Uhm Da Da because he’s a robot, but he eventually realized that’s there’s a type of love only he can give because he’s a robot. After hearing that one’s first love will come true if one dyes their nails with Garden Balsam and the color doesn’t fade until the year’s first snow falls, he dyed his own nails because they won’t ever grow out. He told Uhm Da Da, “My first love will come true for sure,” and touched her heart.

The production staff shared, “[The staff] couldn’t stop giving a thumbs up sign on set for Yeo Jin Goo, who always tries his best and acts seriously. As the end approaches, there will be even more touching scenes, so please look forward to it a lot.”

Girl's Day
Minah
Yeo Jin Goo
How does this article make you feel?