On the July 7 episode, the singer appeared as a guest and joined the panel of celebrity moms and MCs in the studio.

Kim Heechul began, “I asked Shin Dong Yup, ‘Don’t you think I should get married soon? I want to get married before turning 40,’ and he said, ‘Getting married at even 50 is too soon for you.'”

Hearing this, Seo Jang Hoon commented, “Personally, I can’t imagine Kim Heechul getting married and raising kids.” The MC then asked the Super Junior member, “I heard that you don’t think you can sleep with your wife in the same bed because you’re sensitive.” Kim Heechul replied, “I’m very sensitive. I can’t sleep if someone’s next to me. I think this was when I lived in the dorm with the members.”

After the celebrity moms agreed that Kim Heechul should get married before turning 40, the Super Junior member praised “My Ugly Duckling” cast member Hong Jin Young. “She’s someone with a really good personality out of everyone I know,” said Kim Heechul before jokingly calling Hong Jin Young’s mother his mother-in-law.

He added, “I don’t know what kind of food my mother-in-law likes,” and Hong Jin Young’s mother wittily replied, “I like everything.” 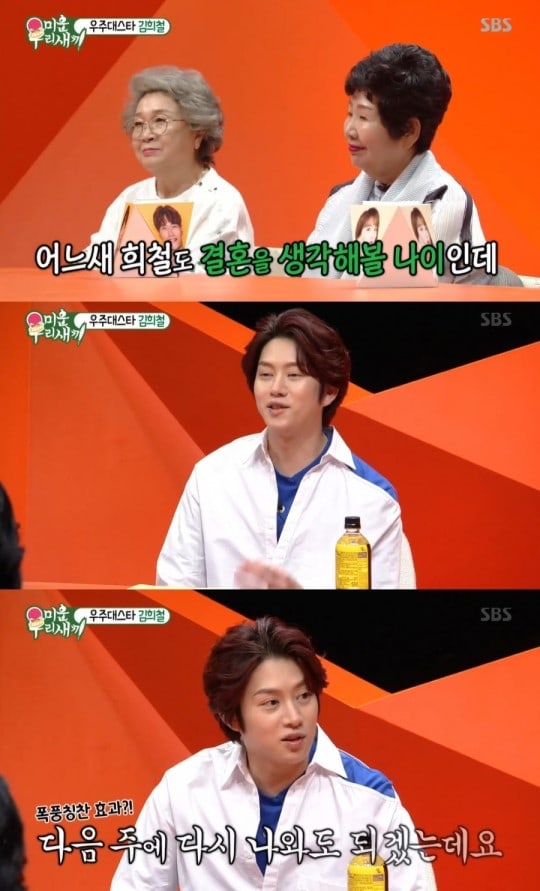 Super Junior
Kim Heechul
My Little Old Boy
How does this article make you feel?