A talented lineup of artists teamed up with the cast of “Running Man”!

On the July 7 episode, Gummy, Nucksal, Code Kunst, Soran, and Apink appeared on the show. These artists will collaborate with the “Running Man” cast for the show’s nine-year anniversary fan meeting.

During the broadcast, two members and one artist had to come together to form a team. The artists hid behind four doors and the cast members competed in a race for the artist of their choice.

The first artist won over the cast with their husky voice while the second and third artists showed other ambitions. The fourth artist gained attention for their experienced vocal skills and vibrations.

When the members asked the artists questions, the first artist answered they debuted in 2000 with R&B and ballads. The second artist said they weren’t comedians and promoted R&B, hip hop, and indie music. The third artist revealed they were main vocalists who focused on performing. The final artist replied they promoted in the 2000s.

Each artist threw a ball from the other side of the door and whoever caught this ball became the artist’s partner. This did not confirm the final team for the collaboration and partners could be changed throughout the day.

Kim Jong Kook and Lee Kwang Soo caught the ball from the first artist who turned out to be Gummy! Everyone commented that they were looking forward to Gummy and Kim Jong Kook’s collaboration, and she performed “You Are My Everything” and “Childish Adult.”

HaHa and Song Ji Hyo caught the ball from the second artist who turned out to be Code Kunst and Nucksal. Because Nucksal and Song Ji Hyo are well known to be lookalikes, everyone burst into laughter when the two stood next to each other.

Code Kunst and Nucksal hyped up the atmosphere with their performance of “Perfume.”

Jun So Min and Yoo Jae Suk were the recipients of the ball from the third artist, who was none other than band Soran. The actress expressed her excitement about getting to work with the band again (they previously performed together at a music festival).

Soran transformed the set into a music festival with their performances of “Don’t Lose Weight” and “Ricotta Cheese Salad.”

Ji Suk Jin and Yang Se Chan caught the ball from the fourth artist, who was the show’s “younger sister” Apink! The members broke out into smiles when they saw the girl group and welcomed them. Apink had the cast on their feet with “LUV” and “I’m So Sick.”

The artists and cast then began competing in a race. The final collaboration team would be decided after lasting three rounds of team competitions. Through the missions, the first two places earned the chance to change their teammates. 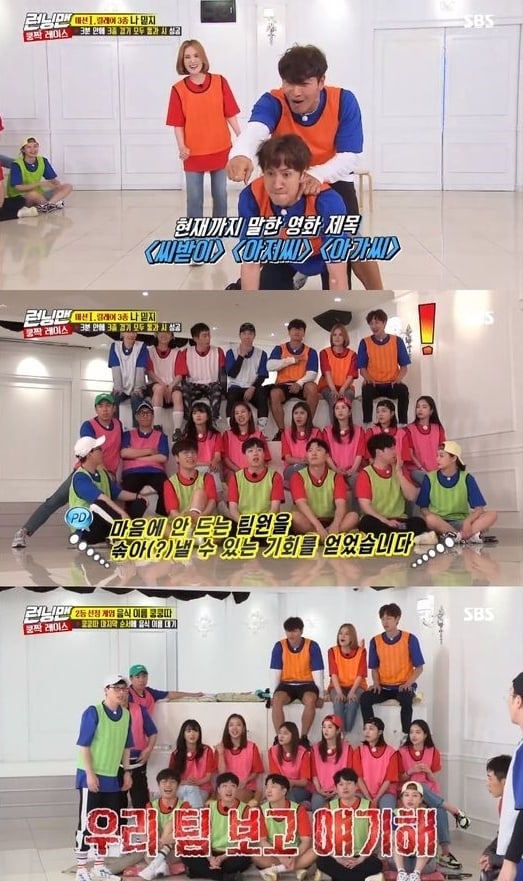