It’s finally here! tvN’s “Hotel Del Luna” received a lot of pre-release buzz for its unique premise and its eye-catching cast (helmed by IU and Yeo Jin Goo), and the drama made its debut this past weekend. It’s the latest from the Hong Sisters, the screenwriting team behind K-drama horror-rom-com hits “Master’s Sun” and “Hwayugi.” And if the premiere is any indication, “Hotel Del Luna” is going to be another wacky, wonderful, magical ride!

Warning: slight spoilers for “Hotel Del Luna” Episodes 1 and 2 below.

From its outset, the drama plunges us into an enthralling world of ghosts, mystery, and magic, set against the backdrop of modern-day Seoul. And at the heart of the story is, of course, the Hotel Del Luna itself:

Unassuming in its daily appearance, the hotel comes to life at night, unfurling into a castle that hides seemingly endless possibilities: it has gorgeous gardens, a pool that is somehow literally a beach, a dope sky bar… 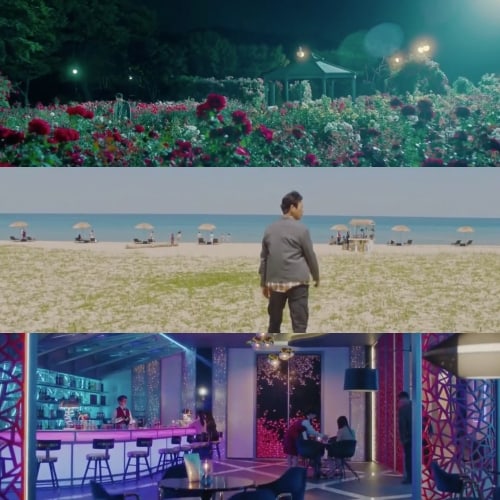 And probably a whole bunch of other sweet facilities, which we hope the drama will explore in the coming episodes. The hotel is also, of course, reserved exclusively for ghosts. 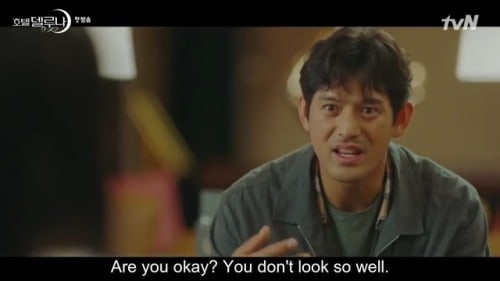 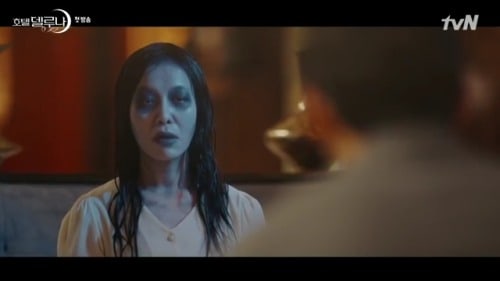 Equally magical and mysterious is the hotel’s CEO, Jang Man Wol (IU), an ethereal and aloof young woman who hasn’t aged in a thousand or so years (we’d love to get her skincare secrets). IU is downright enchanting in this role, and the drama shows her off, blessing us with scene after scene that takes advantage of her spooky elegance — and as if she weren’t stunning enough, her wardrobe is to die for (pun intended).

There’s a reason Man Wol has spent a millennium running a hotel for ghosts, and we know from the drama’s mysterious intro that she took more than a few lives back in her time period; although we must admit that the flashbacks made her look more like a badass than a ruthless killer. But the fact that her employees whisper that she is far scarier than any ghost in the hotel suggests that some terrible and unforgivable sin landed her the job of undead hotel proprietress.

And while the current day Man Wol is devoid of much feeling other than the vague sadness of someone who has been alive for so long, the flashbacks that “Hotel Del Luna” has given us so far show brief glimpses of a dramatic past, and potentially a betrayal, that should fill out her character as the mystery unravels.

In any case, Man Wol is not quite ghost, but not quite human — although we can’t (yet) say that we feel too bad for her, given that she seems to live a pretty decent life between the aforementioned stunning wardrobe and the dozens of sports cars in her garage.

One of the few people who does feel for her, though, is Goo Chan Sung (Yeo Jin Goo) — which is paradoxical considering she has essentially ruined his life, thanks to a deal she made with Chan Sung’s father when Chan Sung was a boy: she spared the man’s life in exchange for his promise that Chan Sung would work for her in twenty years’ time. And while it’s not immediately apparent why a powerful supernatural being like Man Wol needs a human employee, she says that she has to have a mortal around to take care of normal person things: someone has to pay taxes, you know.

Chan Sung, for his part, has spent his youth working hard to get a respectable job at one of the best hotels in the world, only to have his life turned upside down when Man Wol tries to force him to come work for her by giving him the ability to see the dead. After all, it’s hard to live a normal life working at a regular old hotel once you start seeing ghosts left and right, as the drama continually shows us to hilarious effect.

Watching Chan Sung try to maintain composure and ignore the creepy, often gruesome ghosts that now inhabit his world is one of the best parts of the drama’s first two episodes, and showcases the Hong Sisters’ knack for taking scenes that are actually pretty creepy and turning them on their head to make them funny. Man Wol, for her part, is funny for the quirks she’s acquired over the centuries: especially her rather bemusing obsession with visiting restaurants that have been featured on TV, and challenging Chan Sung to eat as much as the show’s hosts could stuff in their mouths.

Chan Sung’s naivety and deeply empathetic nature make him easily likable, but he’s also not a pushover, and we do see him stand up to Man Wol when she tries to make him do something he thinks is unethical. It’s easy to see how Chan Sung could thaw even Man Wol’s cold heart, and no doubt they will challenge each other to grow: Chan Sung into the supernatural world he now inhabits, and Man Wol towards confronting her own past.

“Hotel Del Luna” also offers something beyond the occasionally-spooky rom-com vibes, and as a show that deals with the dead, the drama has already shown that it is not afraid to pull at our heartstrings. We learn that the hotel is a place where ghosts come to satisfy their unfulfilled desires from life and do the things they couldn’t while they were still among the living, whether staying warm…

or reading an entire library’s worth of books.

And that’s not to mention poignant moments like Man Wol helping restless spirits right wrongs that have been done to them so they can finally be at peace, or the too-soon passing of Manager Noh (Jung Dong Hwan), who dedicated so much of his life to the hotel that he barely got to live as a normal human.

These brief side-character anecdotes are not only moving but also helpful in fleshing out the supernatural world of the drama, and we can bet that things will really start to get quirky and fun when we get to know the full cast of hotel employees (hello, Shin Jung Geun, Bae Hae Sun, Block B’s P.O, and gugudan’s Mina!).

While Chan Sung is, for obvious reasons, still not thrilled with his new job, it does seem as though it is beginning to dawn on him what a special place the hotel is, and what fulfilling work lies ahead. And we’re looking forward to watching him grow to appreciate the magic of this enchanting world as much as we already do!

Hey Soompiers, are you watching “Hotel Del Luna”? What were your thoughts on the premiere? Let us know in the comments!