A member of Human Art, the team on the set of tvN’s “Encounter” and “Hotel del Luna,” is claiming that they have not been paid.

In the post, the set team member said, “For over eight months, from last November to now, I haven’t been paid once. In total, my friend and I have not been paid 22.5 million won.”

The writer of the post continued, “In April or May last year, before production began on ‘Encounter,’ I worked on a small web drama, and payments for that were also delayed. Not once have I been paid on time. My payments have been pushed back continuously since November last year, and if I were to keep working, the amount owed to me would just keep growing, so I quit.”

The post writer revealed that this past March, they submitted a petition to the Ministry of Employment and Labor (MOEL). The Human Art CEO asked them to cancel the report, saying they would be paid in April or May. However, the post writer refused, saying, “I’ve never once been paid on time, so I couldn’t trust what [the CEO was saying] and submitted the petition.” 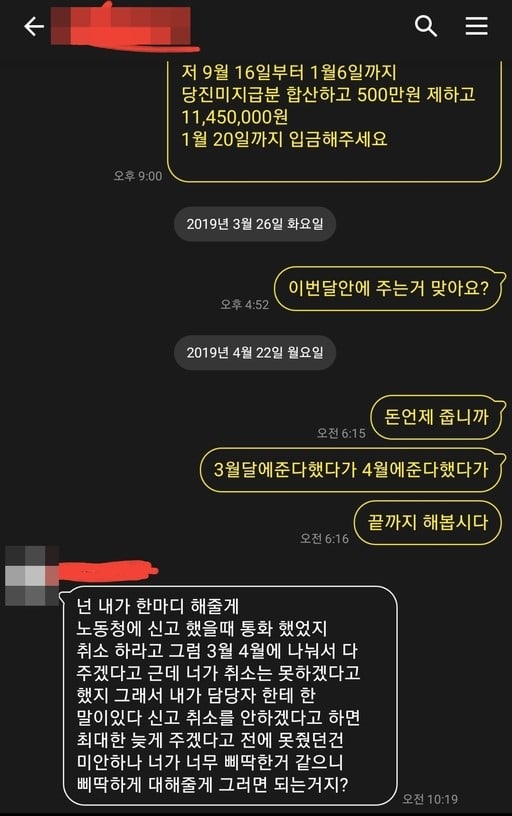 In a text conversation revealed by the post writer, the Human Art CEO responds in a retaliatory way after asked about payments.

The CEO’s responded, “Let me tell you something. When you reported this to the MOEL, we talked about it over the phone, right? I asked you to cancel [the petition], and that if you did, I would pay you the full amount between March and April. But you said you couldn’t cancel it. So here’s what I said to the manager. To pay you as late as possible. I’m sorry we couldn’t pay you sooner, but since you’re so uncooperative, then we’ll be uncooperative with you too. That works, right?”

The post writer said, “This is the kind of person that is leading the set team on IU’s drama ‘Hotel del Luna.’ The friend that I had worked with was diagnosed with a rare disease in April and will have to take medication for the rest of their life. They’re unwell and unable to work, and Human Art has not made one single payment for eight months.”

Encounter
Hotel Del Luna
How does this article make you feel?