“The Divine Fury,” starring Park Seo Joon, Ahn Sung Ki, and Woo Do Hwan, has released a new poster and teaser ahead of its premiere!

The upcoming film is a supernatural action thriller about a champion fighter named Yong Hoo (played by Park Seo Joon) who seeks out Father Ahn (Ahn Sung Ki), an exorcist, when he suddenly develops strange wounds on his palms. Together, they take a stand against powerful evil forces wreaking havoc in the human world.

The new poster contains the three main characters. Both Park Seo Joon and Ahn Sung Ki are wearing clerical clothing of priests while Woo Do Hwan is in a sleek suit. All of them have intense expressions on their faces that are emphasized by the flames on the bottom. On the poster, it asks, “Will you side with evil or fight against evil?” 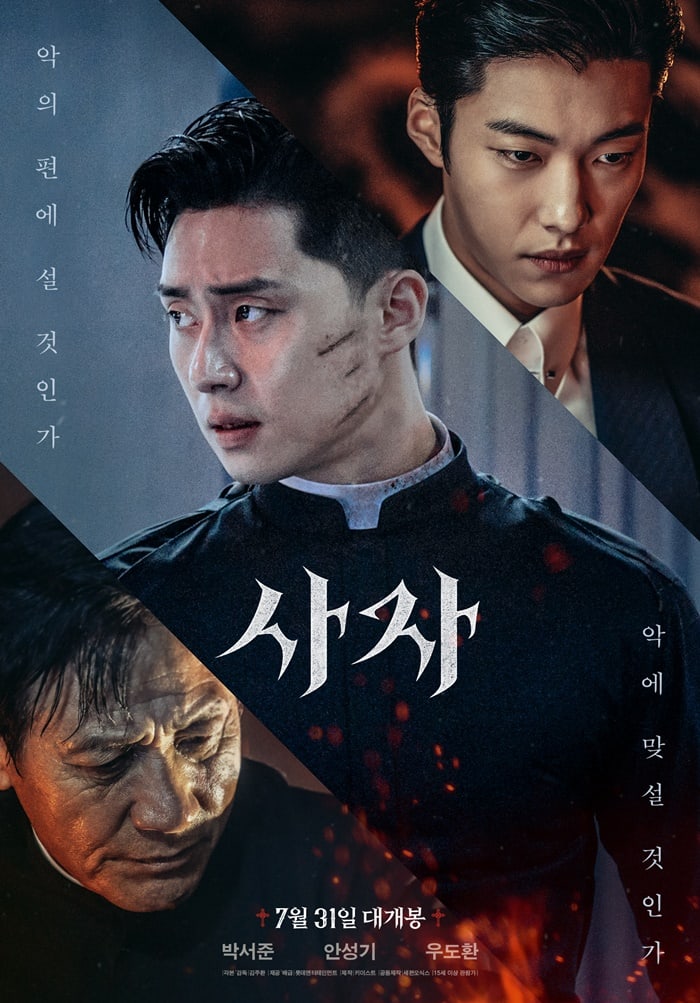 The new teaser starts off with a priest telling little Yong Hoo, “If you pray hard, the Lord will listen to you.” However, Yong Hoo becomes enraged that God didn’t do anything when his father passed away and vows revenge. His anger and resentment grow with him as he becomes a champion fighter.

On the other hand, Father Ahn searches for a priest to fight with him against evil. He goes to Yong Hoo who declares he doesn’t believe in God because he did nothing when his father died. Despite his firm intention to not get involved in religion, he finds himself tagging alongside Father Ahn and battling against demons.

Father Ahn asks why he followed him, and Yong Hoo simply declares, “I believe you.” Their battle against evil officially starts, and towards the end, Yong Hoo stares at his flaming hand in disbelief.