In the statement, the law firm outlined the reasoning behind the prosecutors’ decision to drop charges on Kang Sung Hoon (described in original article below). They concluded the statement with the following message:

[…] Although Kang Sung Hoon was not legally indicted, as a public figure, he is feeling very apologetic to fans regarding the video screening case. He is feeling greatly responsible for not having meticulously checked the [details] of the event and not communicating with fans when he should have done so.

Through this statement, he would like to tell fans that he will be careful and make sure something like this does not happen again. He is determined to avoid disappointing his fans again and would like to show them a better side of himself. Furthermore, we ask everyone to refrain from writing false [posts] on social media about Kang Sung Hoon and [Hoony World’s moderator] ‘Park’ that pertain to libel and defamation of character.

The law firm also revealed four certificates proving that he had donated the money he had been accused of embezzling. 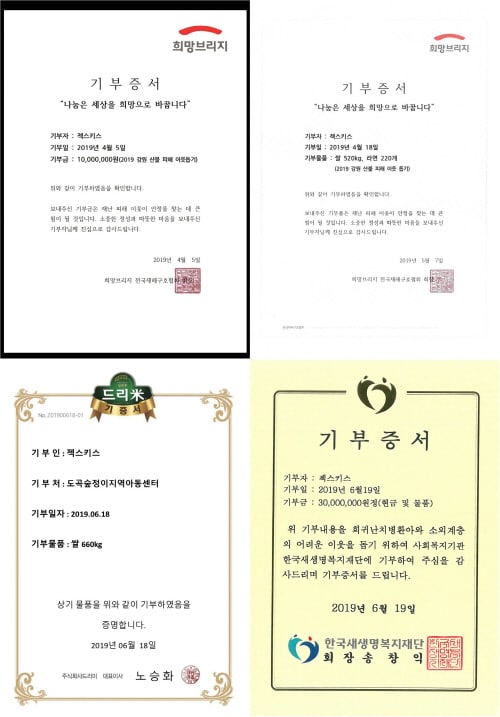 The prosecution has dropped embezzlement and fraud charges on Kang Sung Hoon.

Last November, a group of SECHSKIES fans filed a complaint against Kang Sung Hoon and his fan club Hoony World for allegedly embezzling profits from a video screening session hosted as an event for SECHSKIES’s 20-year debut anniversary on April 15, 2017. Hoony World was accused of falsely recording the profits as if they were donated while actually embezzling the profits.

On July 17, the Seoul Central District Prosecutor’s Office dropped charges on Kang Sung Hoon for embezzlement and fraud due to lack of evidence.

Fans had argued that the remaining 40 million won (approximately $33,900) excluding expenses from the video screening session had not been donated. Kang Sung Hoon was also accused of embezzling the remaining funds by transferring the money to bank accounts owned by Hoony World’s moderator and the moderator’s brother.

The prosecution argued that the main purpose of the event was the video screening, not the donation, and because the fund-raising campaign was held voluntarily by fans, it is unreasonable to state that Kang Sung Hoon deceived his fans. They also explained that because Kang Sung Hoon and his fans had not decided on a specific amount or a charity to donate to, he is not guilty of embezzlement.

Kang Sung Hoon was also accused of playing SECHSKIES videos owned by broadcasting companies at a video screening and sharing them with members of his fan club in the form of a disc.

In relation to these charges, the prosecution argued that it is not an infringement on copyright laws because Kang Sung Hoon has the right to replicate it as an individual who is in the video. Moreover, the broadcasting companies that own the clips did not find his actions problematic.

Kang Sung Hoon
How does this article make you feel?