The creators of upcoming JTBC drama “Moments of 18” spoke about their casting decisions.

“Moments of 18” is a relatable drama about the lives and struggles of 18 year olds. Many fans are looking forward to watching Ong Seong Wu’s drama debut and seeing Kim Hyang Gi in her first drama in four years. Joining these two leads are rising rookie Shin Seung Ho and talented actor Kang Ki Young.

Director Shim Na Yeon, who is known for her detailed directing and emotional aesthetics in JTBC Drama Festa’s “Hip Hop Teacher” and “A Midsummer’s Memory,” will be working with writer Yoon Kyung Ah who has penned “Master of Study,” “Brain,” and “Perfect Wife.”

Speaking about her first school drama in 10 years after “Master of Study,” writer Yoon Kyung Ah said, “‘Master of Study’ was a story about struggling students who became good at studying and found direction in their lives due to their hard work and effort. Their effort, success, and achievements were inside of a large frame, but ‘Moments of 18’ discusses inner struggles, conflicts with parents, and their love. It’s a drama that is focused on the small emotions and psychological portrayals of 18-year-old teenagers.”

Director Shim Na Yeon explained, “I thought that viewers would be able to relate more if we focused on the detailed emotions swirling around a small incident. So it could be a bit slower unlike previous school dramas, but we didn’t rush it and tried to focus on their emotions.”

The sentimental vibes of the teasers gave viewers a peek of the tone of “Moments of 18.” The director said, “I focused on capturing the feelings of the actors who had transformed into their characters and their youthful, innocent appearance. The actors—Ong Seong Wu’s pure innocence, Kim Hyang Gi’s warm but tough spirit, Shin Seung Ho’s healthy and energetic charms, and Kang Ki Young’s generous and humorous appearance—are breathing life into their characters in their own ways, so I’m trying to capture them without manufacturing them.”

Describing the meaning behind the title, Yoon Kyung Ah said, “You don’t realize it during that time, but 18 is the most brilliant and beautiful time in one’s life. It’s a time when you can look at the world with the purest and most passionate emotions. Each and every moment leaves a strong impression and stays with that person for the rest of their life. ‘Moments of 18’ tells the story of those heart-fluttering, pure, awkward, and passionate moments. I want to remind people of those precious moments in their hearts.”

She continued, “There are many limitations when trying to show the spectacular story of 18-year-old boys and girls. They’re forced to study for two-thirds of the day in schools and academies, and their lives are a continuation of a monotonous routine. Because of that, I think that it’s a plus to focus more on the emotions of the characters. Because these are innocent years, the ups and downs of their emotions are stronger than those of adults. Even though they’re awkward and inexperienced, it makes their existence even more passionate and beautiful.”

“Ong Seong Wu was the image that writer Yoon Kyung Ah had drawn up when she began creating the story of a lonely boy,” revealed Shim Na Yeon. “So I was thinking, ‘It has to be this person.’ When he made the decision to appear, I was so happy and was grateful for his humble attitude towards acting.” Yoon Kyung Ah added, “The lonely look in Ong Seung Wu’s eyes even when he’s smiling brightly is a signature that does a good job of showing the topic of this drama.”

The director continued, “Kim Hyang Gi is an actress who I’m surprised by every day due to her extraordinary concentration. She’s a good actress who doesn’t exaggerate a single scene and portrays it as is. I feel respect towards her every time I see her. There’s no other way to express it besides that.” The writer added, “She’s an actress who I always feel good energy from whenever I see her. I heard that she’s been showing great acting on set, and I thought, ‘Of course.’ She’s a top-notch actress who makes a writer write scripts with delight.” 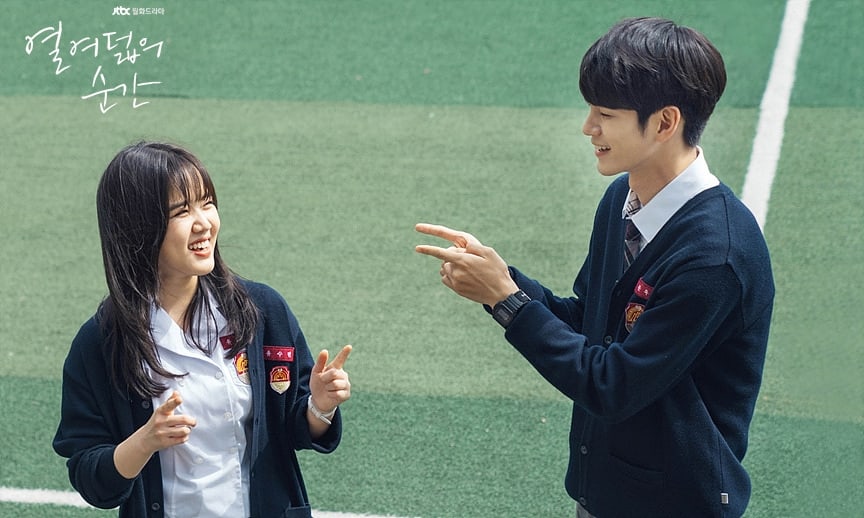 On actor Shin Seung Ho, the director said, “He’s doing a good job of conveying Ma Hwi Young who triggers conflicts in the drama but is impossible to hate. It’s a villain role of an 18 year old that only Shin Seung Ho can portray.” Yoon Kyung Ah added, “The character Ma Hwi Young is a villain who has a deep wound in his heart and someone who people can’t help but sympathize with. Even though he’s a difficult character, I was surprised by how good he was at portraying him.”

Shim Na Yeon revealed that Kang Ki Young was her top choice for the role. “He’s an actor who puts you in a good mood just by meeting him,” said the director. “His sense of humor and trust acts like a fairy in our drama. I’m also thankful for his generosity on set.” The writer added, “Teacher Oh Han Kyul is someone who is awkward, warmhearted, truthful, and someone who comforts you just by being by your side when you’re going through a difficult time. I think that Kang Ki Young is exactly that.”

The director concluded, “I hope many of you will relate to ‘Moments of 18’ which is exciting and sad. You’ll be able to feel warm and moved within the funny moments which is Yoon Kyung Ah’s trademark.” Yoon Kyung Ah said, “I hope that we can all go back to the youthful, innocent age of 18 while watching ‘Moments of 18.’ Visiting who you were back then and someone you had forgotten about for a long time will give you simple joy on Monday and Tuesday nights.”

“Moments of 18” premieres on July 22 at 9:30 p.m. KST, and will be available on Viki with English subtitles. Check out the trailer below: