Ji Sung’s latest teasers for his new medical drama, SBS’s “Doctor John,” has viewers guessing because of the unexpected location.

Ji Sung’s character, Cha Yo Han, is a former anesthesiologist who was serving a prison sentence at the beginning of the drama. Although prison is hardly the typical location for a medical drama, the latest stills for Cha Yo Han show him in another unexpected location. 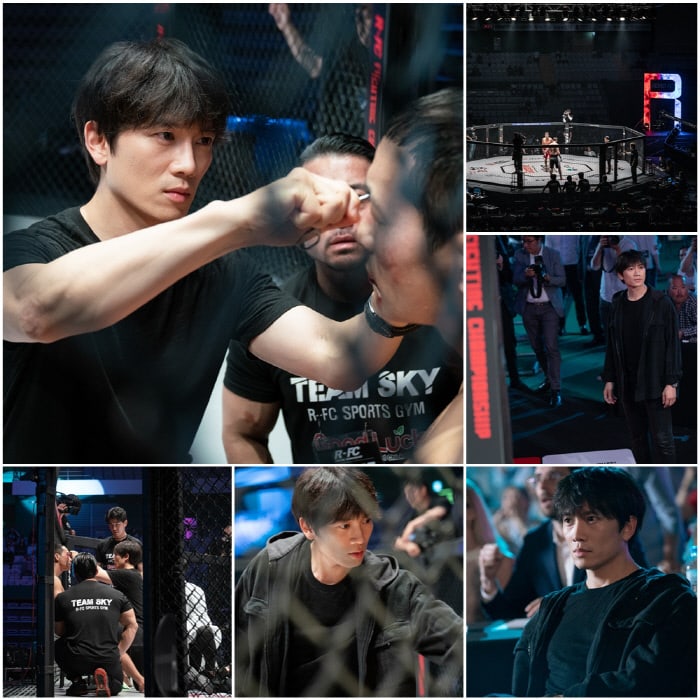 In the photos, Cha Yo Han climbs up to the ring during a “Road FC” mixed martial arts match and is seen examining one of the fighters, an athlete named Joo Hyung Woo (played by Ha Do Kwon). It seems as if there is something wrong with the fighter’s face and Ji Sung treats the injury skilfully despite the fact that he isn’t there in any formal capacity (he isn’t wearing a doctor’s gown).

The scene in question was filmed on June 15 in the city of Wonju in Gangwon Province. The scene was filmed at a real “Road FC” match arena and filming took place during breaks in the real match and after the real match was over. The “Road FC” representatives allowed filming to occur with their staff members and audience members present, contributing to a sense of realism for the drama.

Ji Sung prepared a lot for the scene as well, holding discussions with the director, Jo Su Won, and actor Ha Do Kwon. The production staff stated, “No matter what scene we’re filming, Ji Sung devotes himself and does his best. He carries much of the weight on ‘Doctor John.’ In Episodes 3 and 4, Ji Sung will be working as a bona fide anesthesiologist and chronic pain doctor, but there will be unexpected developments in store.”

You can watch the latest episode of “Doctor John” with English subtitles below!