On July 26, Channel A’s “News A” reported further details about the businesses in a building owned by BIGBANG’s Daesung.

The previous day, the network reported that illegal entertainment businesses, some of which allegedly involve prostitution services, were being operated on five floors of a Gangnam building owned by Daesung.

The entertainment business owner said, “It’s really appalling to us that Daesung’s side is playing dumb. There’s no way he doesn’t know [about illegal activities] because his representative had a meeting at night with us and they came down to the store and talked with us in the room.”

When Daesung became the owner of the building, the business owners were reportedly worried that there may be more crackdowns because it was owned by a celebrity and they considered moving their businesses. The report states that this idea was turned down by Daesung’s side. The business owner said, “When we were negotiating, we first talked about compensation. To be honest, it costs a lot of money to run a store like this.”

In response, Daesung’s representatives said, “We have to check the facts first.” 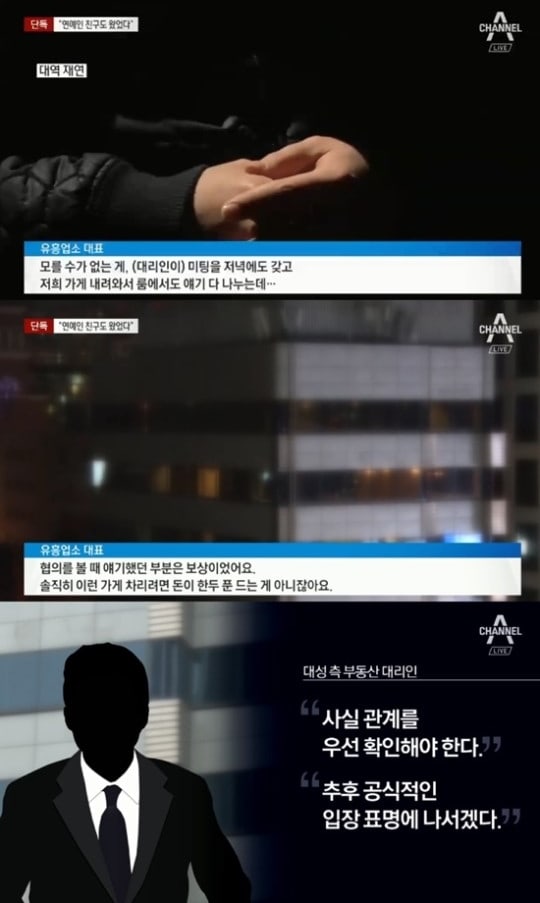 Channel A also stated that the entertainment businesses in the building were reported nine times just this year. Even though the police are said to have visited the building after receiving these reports, the businesses continued to operate.

The person who gave Channel A the information about the alleged illegal operations in Daesung’s building (hereafter known as “A”) said that they reported the building to the police many times but it was of no use. “A” said, “I spoke with the police officer who came to the scene. About 40 to 50 women go to work [in the building], but they said they couldn’t find a single one.”

A hostess at one of the illegal entertainment businesses explained, “The police suddenly showed up and asked what our relationship was. I got away with it by saying that we were introduced through an acquaintance and drink together.”

In May, police reportedly heard that Daesung was the owner of the building, but closed most of the investigations without charges. The police also allegedly cracked down and booked eight people, but the illegal business continued operations even up to last week.

The Gangnam District Office also cracked down on the building once in May, but failed to catch the suspects. An employee of the Gangnam District Office’s Food Hygiene Department said, “Because we didn’t have authority to investigate, the [businesses] said we couldn’t come in and blocked us. [It’s hard to catch them] when they block us, clean up, and inform each other through walkie-talkies.”

Channel A also reports that the police will begin an investigation into the taxes paid on the building. The owners of buildings containing entertainment bars must pay up to 16 times as much in property tax as the owners of general buildings.

Channel A states that although there are five of these bars in the building, Daesung has been paying taxes appropriate for a general business license since he purchased the building in 2017. If the Gangnam District Office confirms this during their investigation, they could be collecting additional property tax from Daesung.

It’s also reported that as the entertainment bars falsely registered as general restaurants, it appears they each intentionally did not pay the additional special consumption tax that applies to entertainment bars. In addition, an investigation will be carried out to compare the rental profits officially reported on paper with the real rental fees to see if Daesung underreported rental income.