Jun So Min expressed her confidence that she would be able to woo fellow “Running Man” cast member Yang Se Chan.

During the episode of SBS’s variety show “Running Man” that aired on July 28, the cast was joined by Song Ji In, Jang Jin Hee, Oh My Girl’s Seunghee, and Rothy in a couple’s race with “Scene stealers.”

While moving to a restaurant, a round of teasing began about Jun So Min and Yang Se Chan. The other members brought the laughs as they joked, “Ji Suk Jin is jealous” as he was Jun So Min’s partner in the race, creating a pretend love triangle between the three. Yoo Jae Suk remarked, “I’ve seen many love lines over the years in variety shows, but I’ve never seen one like this one.”

He then went on to say, “I think Jun So Min has some feelings for Yang Se Chan,” to which she looked taken aback and said, “I didn’t say anything (so why are you like this)?” HaHa added on to the teasing as he said, “But I don’t think Jun So Min could steal Yang Se Chan’s heart.” See balked and said, “It’s not that I can’t, it’s that I won’t. I could win him over in a single day!”

Yang Se Chan looked like he couldn’t believe the conversation going on and said, “I would only need half a day.” Jun So Min had everyone laughing as she confidently replied, “I just need one day. Later on, you’re going to end up at my house.” 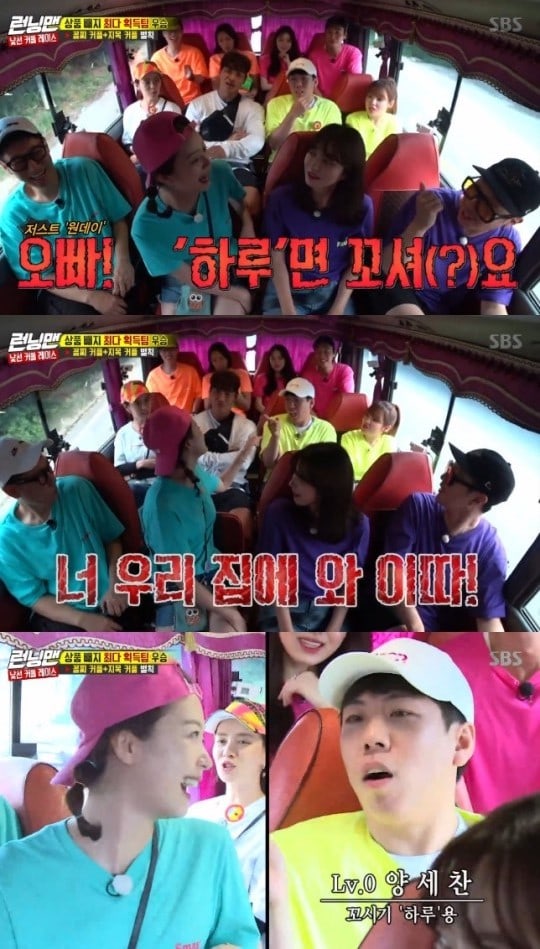