Woo Do Hwan Talks About “The Divine Fury,” Wanting To Star In A Romance Film, And His Dating Style

Woo Do Hwan talked about his upcoming film “The Divine Fury” in a recent interview with SpoTV News!

“The Divine Fury” is a supernatural action thriller about a champion fighter named Yong Hoo (Park Seo Joon) who seeks out the exorcist Father Ahn (Ahn Sung Ki) when he suddenly develops strange wounds on his palms. Woo Do Hwan will play Ji Shin, a mysterious figure who has the ability to see others’ weaknesses and uses them to his advantage.

During the interview, Woo Do Hwan shared his excitement for the film. He said, “I strived [to act] with the mindset of wanting to try something others haven’t been able to do.” Despite sharing that as an actor he always feels [like he could have done better] after acting, Woo Do Hwan expressed his satisfaction, saying, “I think there’s a huge change. I thought that I’d show a different side than from my previous dramas.”

The actor touched upon the conflicting reviews from the preview screening, guessing that the differences in expectations for the genre were what divided the reviews. He added, “I want to ask viewers who thought that it was a shame that [the movie] was a battle between good and evil to look upon the film with love. This way, a second movie can also be made.” 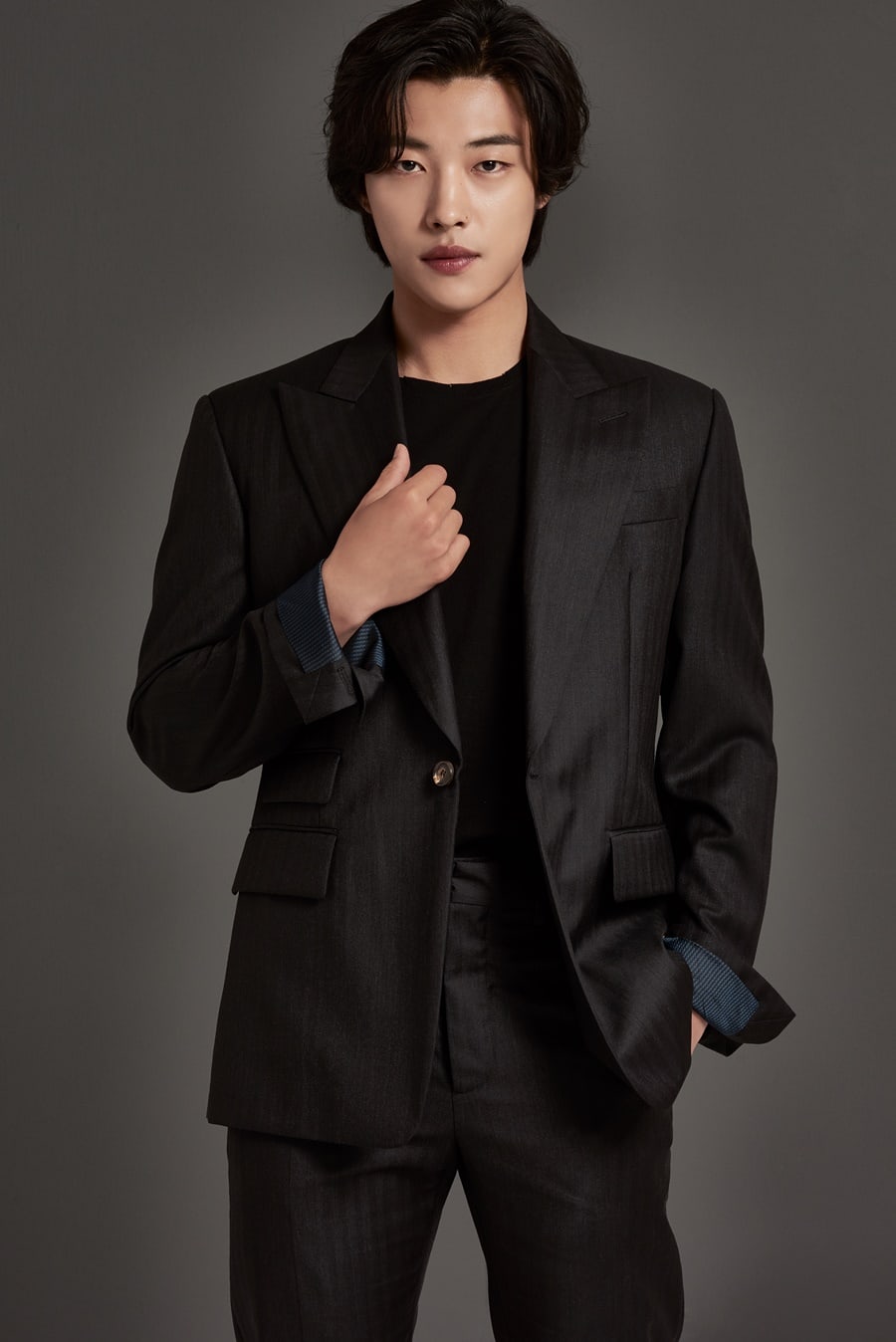 Woo Do Hwan also revealed that he had not seen occult movies before filming “The Divine Fury.” He shared, “I don’t think our movie is a horror movie. I’ve never really had the thought of wanting to do horror films. I tried out for ‘Gonjiam: Haunted Asylum,’ but it didn’t go so well. I want to see the director once again.” He also mentioned that he got scared while practicing for his role in the dark.

For the film, Woo Do Hwan changed his hair by styling it up. He jokingly explained that the transformation showed more of his face, thereby increasing the range in which he could show off his acting.

In regards to his chemistry with Park Seo Joon and Ahn Sung Ki, he shared, “Park Seo Joon is very mellow. I called him as I got worried for the [movie’s] release. Rather than not being afraid, he has a strong sense of composure. He always takes care of me well.” He added, “While Ahn Sung Ki has been acting for a long time, he always treats me comfortably like a friend, and he has deep thoughts about acting.” 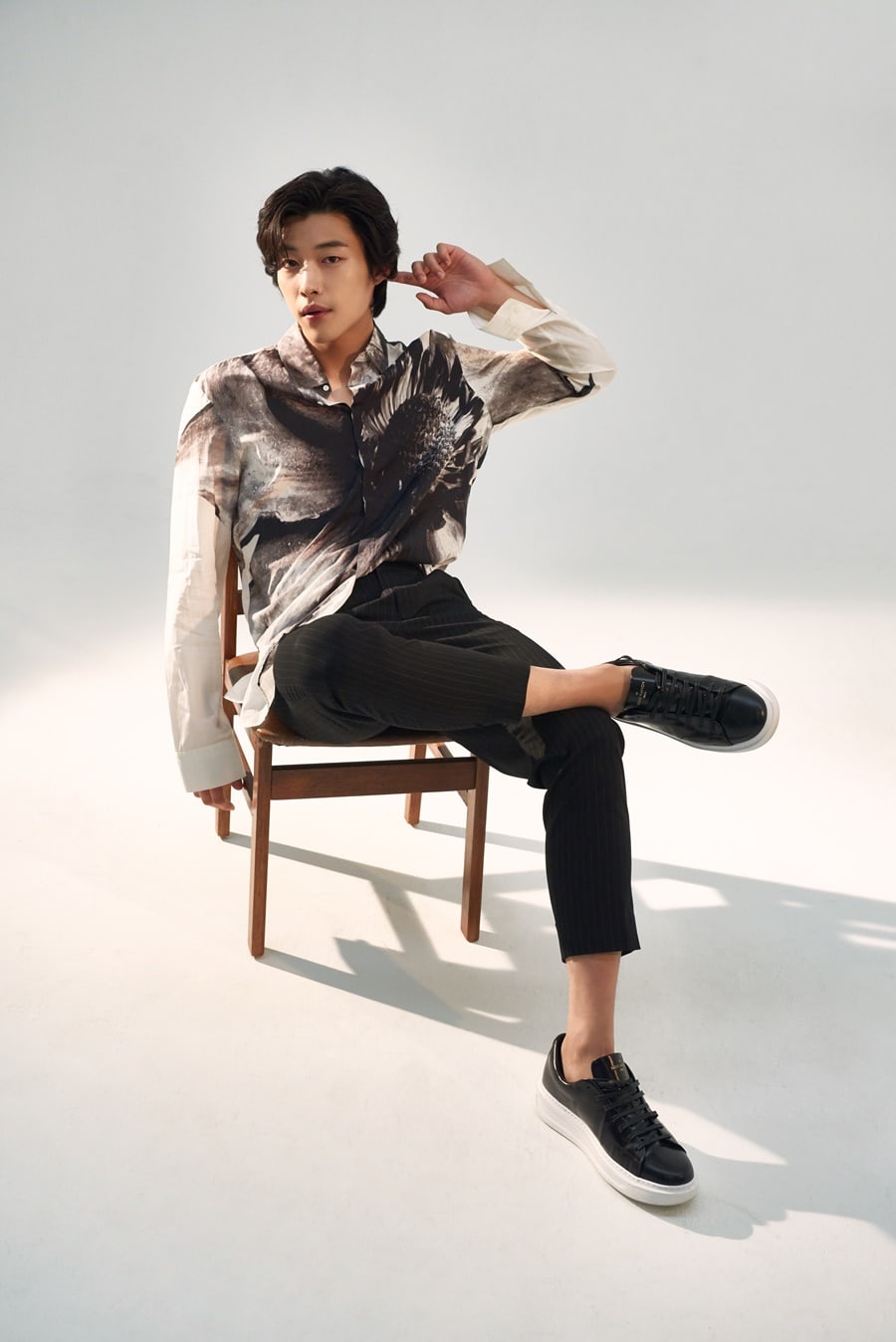 On future projects, Woo Do Hwan expressed that he would like to try the romance genre. He shared, “I like melodramas. I want to do a film about love,” while picking “About Time” as his favorite film. He added, “Before, I received offers for innocent melodramas, but because of my image, I get offers for passionate melodramas these days.” Woo Do Hwan shared, “I want to try [acting] at least once in a film about the love [of people] in their 20s, which I can show at my age. I surely feel that love in your 30s will be different,” expressing his desires to showcase his emotional acting.

Woo Do Hwan also touched upon his actual dating style. He said, “I always got dumped. The people I dated were the type to work even harder for their dreams. I always chose love. Now, it’s been a long time since I’ve dated. From my late 20s, I was very busy.” Woo Do Hwan explained, “I always want to date, and if I were to date now, I would compromise between love and work rather than choosing just one.”

In the meantime, catch Woo Do Hwan in “Mad Dog” below:

Woo Do Hwan
The Divine Fury
How does this article make you feel?