These stars were featured in the magazine as the leads of the musical “Shinheung Military Academy” (literal title), which tells the story of young people who led the anti-Japanese movement during Japanese colonial rule.

In the accompanying interviews, the celebrities shared their thoughts on the musical and life in the military. Sunggyu began, “I enlisted in the training center in May of last year. I remember it was hot during the day and cold enough at night for me to wear another layer under my clothes. Everyone worries at first, but I worked hard to train with my military colleagues. Now that the adaptation period is over, I now feel happy just looking at the clean air, mountain, and waterfront landscape of Gangwon Province. I was used to living in a dorm due to having been a trainee since I was young, so I think that experience is helping me a lot in the living quarters now.”

Sending a message to his fans, Sunggyu said, “I can’t believe that I’ve already become a corporal. These are good experiences for my life, so I think of them as meaningful. During the remainder of my service, I’ll continue to be aware of the value of this time and try my best with sincerity and in good health to complete my military service. Thank you so much to my family, fans, and everyone who is cheering for my members as well. Because you send me letters and always cheer me on, I think, ‘There are people who love and support me’ and gain strength. I’ll repay you by working hard to sing and act in ‘Shinheung Military Academy.'” 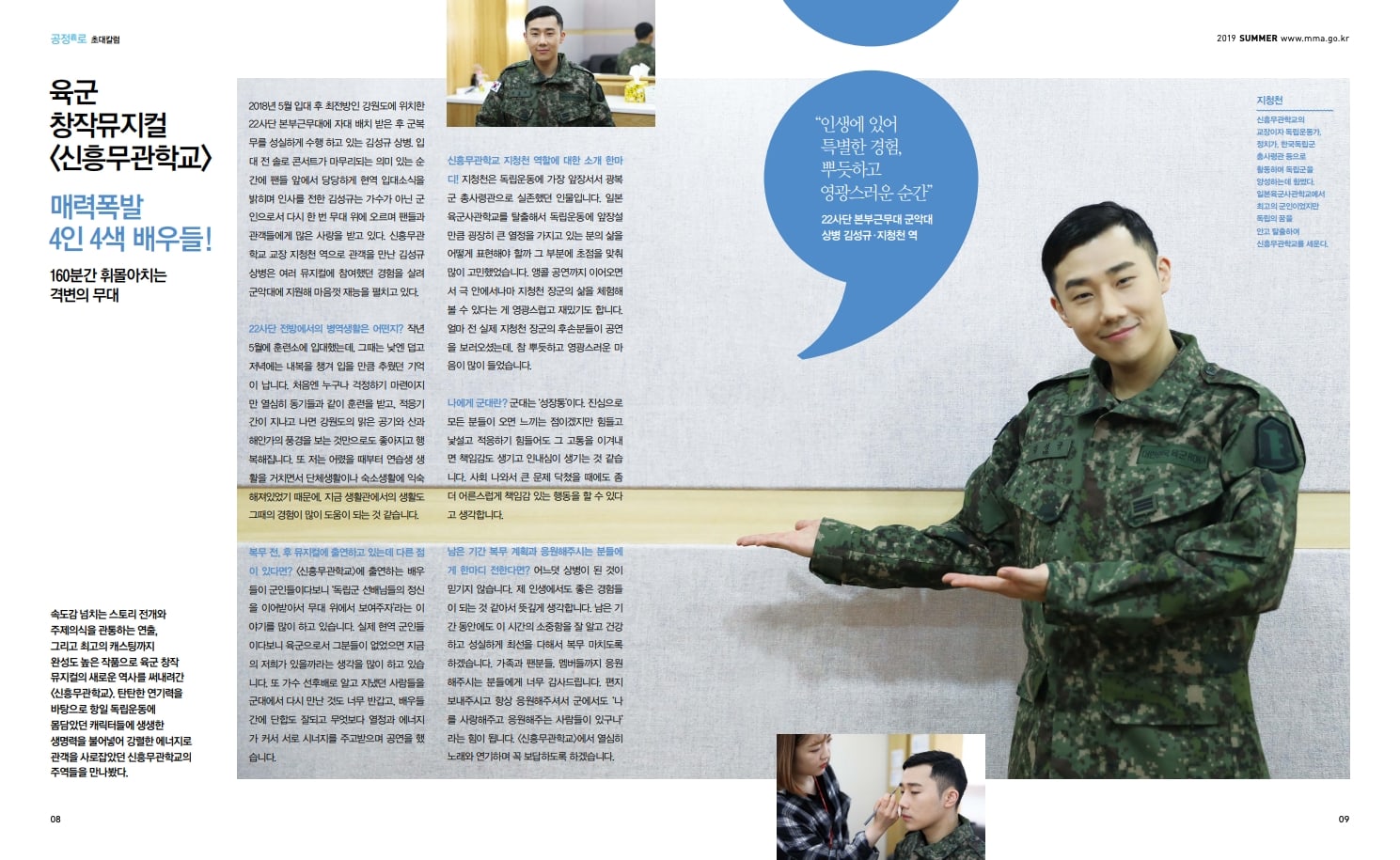 “The military is a duty,” began Onew. “My ultimate goal was ‘I should work hard at things that I can do here and return in good health.’ So I participated in this musical thinking that I should try doing something I’m good at. I most liked being able to meet other military actors and talking, sharing, and leading the musical together.”

When asked to give a message to youth, Onew said, “The military to me is ‘rest.’ While trying my best at my given role, it’s fun eating, sleeping, training, and being with the other soldiers like family. This is like a period of rest for me, after having lived my whole life without stopping. You can’t help but be fearful ahead of your enlistment. You may think that you’ll be separated from your family and can’t communicate well, but cell phone use is allowed after work, and I think many changes have taken place. The military is also a kind of society and a place where people live together. It’s a short amount of time and it won’t be difficult if you put your mind to rest.”

To his fellow SHINee members and fans, Onew concluded, “I wanted to say that Minho enlisting in the Marines was a really cool decision, and I hope that Key, who’s promoting in the military band, will also return safely without getting hurt. I’m doing a good job receiving training, am healthy, and doing well. I’m also reading all of the fans’ letters and feel happy and thankful that there are many small ways to communicate with you like this. I’m happy that there are more opportunities for us to see each other while I appear in the musical compared to when I was out in society. Please look forward to more in the future.” 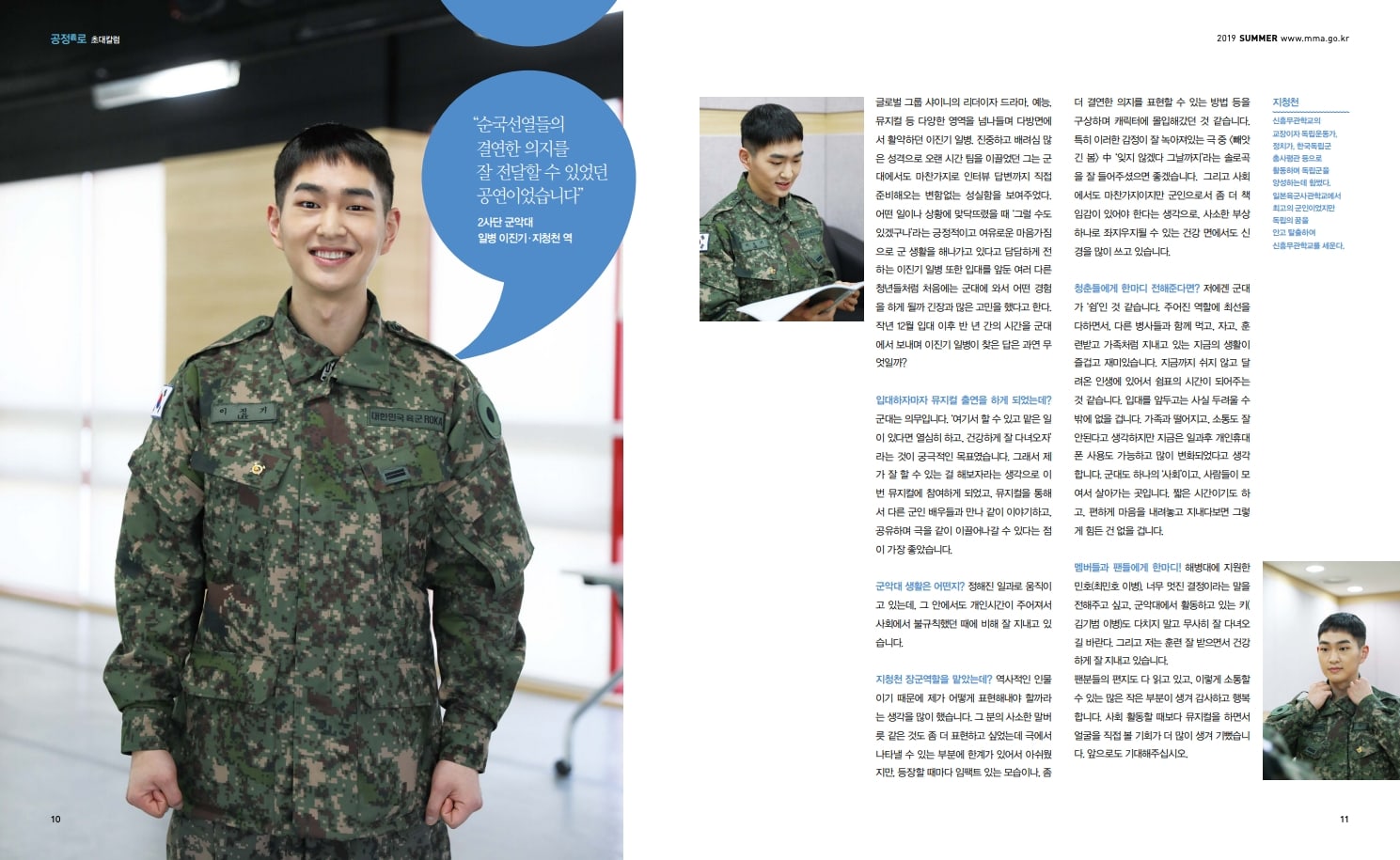 Jo Kwon stated, “The military is a place where different people gather together with many rules, so it’s a place where everyone including me needs time to adjust. Since I’m much older, it’s physically more difficult for me. But I’m enduring well with my tough spirit and continuing my military life. Because I’m a military actor, I’m living in a set schedule. Even though the average soldier rests on the weekend, I rest for one day on Mondays when there isn’t a performance. so that’s a little different. The performance ends at 8 p.m. on weekdays, and it’s usually past 12 a.m. when I return to the base.”

Sending a message to his fans, Jo Kwon said, “I’m happy that I can communicate with many people through the performance, and I’m so so thankful that fans came to cheer me on. I hope the fans will wait healthily until the day 2AM reunites again with Jinwoon and Seulong. I feel honored and happy that I was given the opportunity to showcase my talent and to spread knowledge about history at the military band through the musical. Last time, many Japanese fans came to watch, and I felt proud when I heard them say that they learned about history they should reflect upon. I hope more opportunities like this will arise in the future, and I’ll continue to work hard to fulfill my service with a prideful heart until the day I’m discharged.” 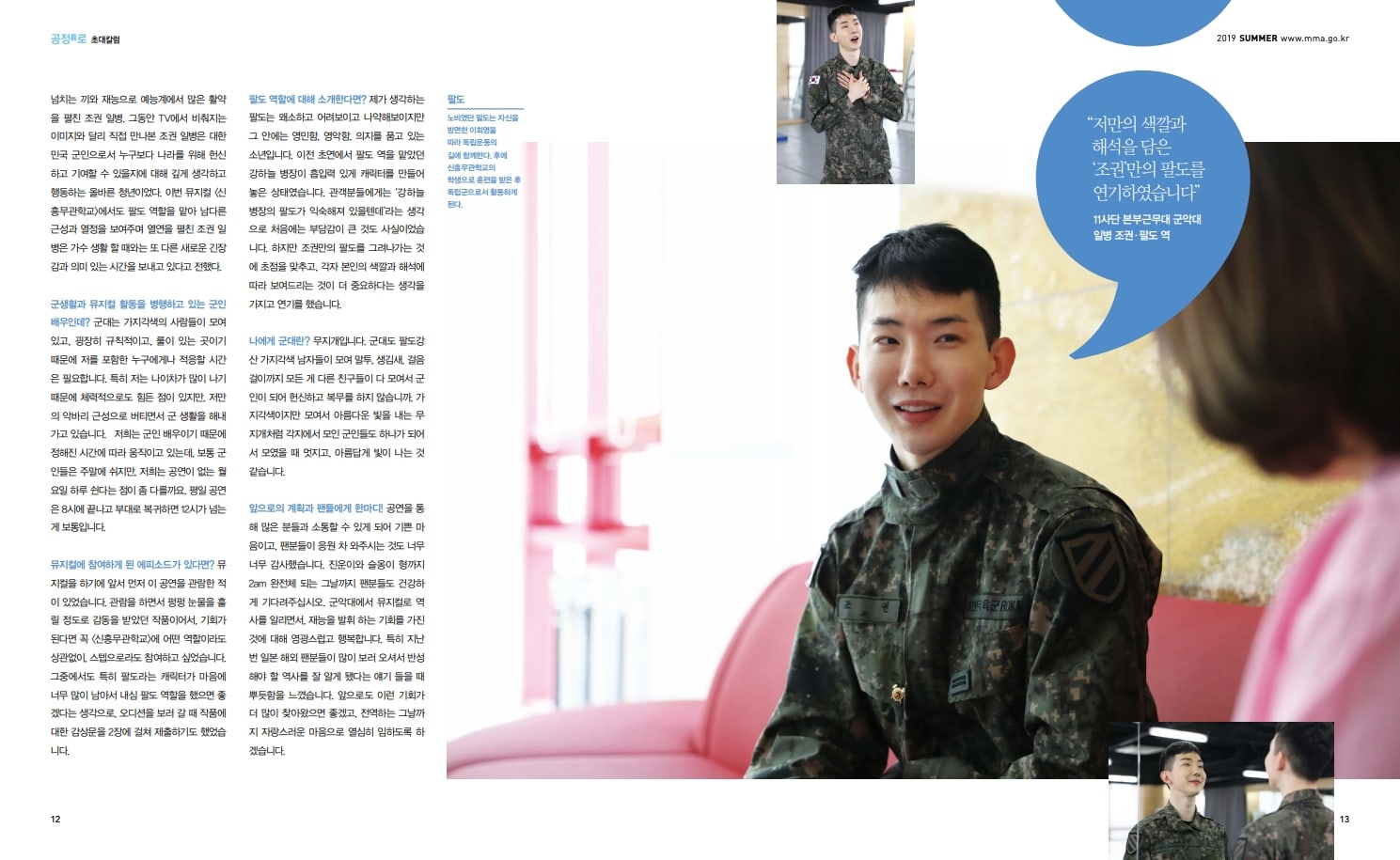 SHINee
INFINITE
Onew
Jo Kwon
Sunggyu
How does this article make you feel?