On the July 30 episode of SBS’s “Night of Real Entertainment,” Yook Sungjae participated in an interview about celebrities’ use of social media.

The BTOB member is known for wowing fans with his vocals and handsome looks onstage, and making them laugh offstage with his hilarious posts on Instagram and more. During his interview with the entertainment news program, Yook Sungjae said, “Early after my debut, my agency restrained me a lot because I would suddenly take and upload silly photos or crack a watermelon with my head. For about three years after my debut, they said, ‘You guys are rookies and we want you to continue with a cool vibe.'”

He added with a laugh, “But I confidently continued on my own path.”

Yook Sungjae currently appears on “95s” which is a web series he came up the idea for to show the true sides of him and other idols born in the year 1995. These stars include former Boyfriend members Youngmin, Kwangmin, and Minwoo, Teen Top’s Ricky, and model Baek Kyung Do.

The BTOB member explained, “I wanted to show the idols’ appearances offstage and challenges that only young people in their 20s can do. We recently tried to sell ddeokbokki (spicy rice cakes) at a snack stand. I think the characteristic of today’s idols is that they’re able to show honesty and natural appearances right away.” 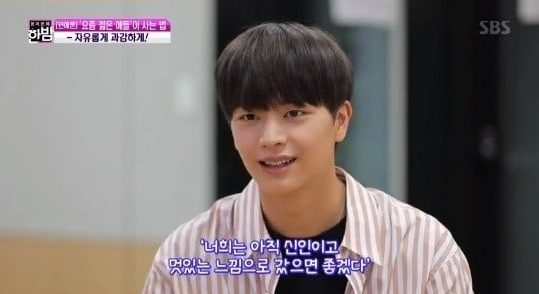 BTOB
Yook Sungjae
Night of Real Entertainment
How does this article make you feel?