Viewers got a closer look at the creepy dorm of “Strangers from Hell.”

The upcoming OCN mystery thriller is about an aspiring novelist named Yoon Jong Woo (played by Im Siwan) who moves to Seoul for an internship and finds himself in an unexpected hell created by unusual residents in his dorm building.

In the stills, Yoon Jong Woo looks up at Eden Dormitory, which is located on the third floor of a decrepit building. This is the only place he could afford, and the low price seems to directly reflect the looks of his new humble abode.

After pushing past the worn-out doorplate that reads “Eden Dormitory,” a dark hallway awaits. Closed doors line both sides of the long, narrow hallway and automatically heighten fears of any noises one may hear.

The kitchen is a common space for all of the dormitory residents, and its age is visible through the yellowed wallpaper and antiquated appliances. Each resident’s room is so narrow that you can only lay down after putting your feet under the desk. Just seeing these photos gives viewers a hint of Jong Woo’s challenging life in Seoul and the difficulties of living in a strange place with strange people.

Eden Dormitory is a set that was specifically created after carefully choosing each and every prop. Art director Park Jae Hyun, who previously brought a dark future to life in “Illang: The Wolf Brigade,” led the creation of this set.

He explained, “My goal for this project was to create a dormitory that felt humid and bleak just by looking at it, with a dark, long, cave-like hallway and rooms with tiny windows replicating a prison. I wanted to express the stress of being in a strange place and the vague fear of unknown strangers as a space of Eden Dormitory. At the same time, I had to maintain the possibility of this kind of place existing in real life.” 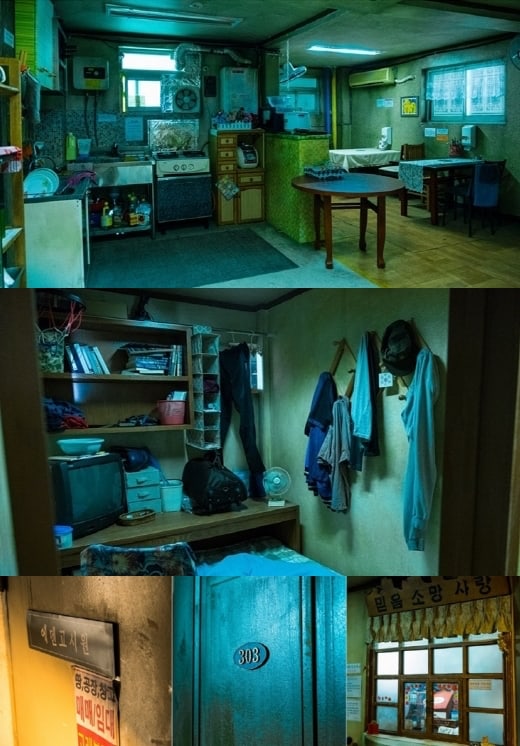 “Strangers from Hell” premieres on August 31 at 10:30 p.m. KST as the follow-up to “Watcher.” Check out the latest teaser here.