In the drama, Goo Chan Sung is not a typical prince on a white horse or someone who spouts cheesy lines, but his words and actions towards Jang Man Wol (played by IU) are always full of sincerity. 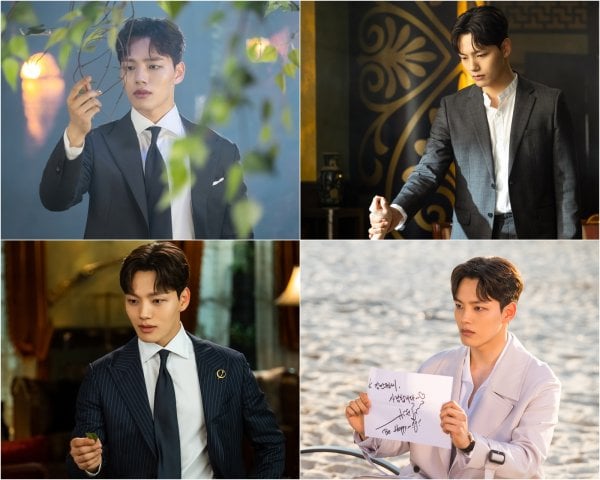 Here are four of his lines that made us fall even harder for his charms!

“You take up all my nights and dreams.”

Goo Chan Sung is the manager for Hotel Del Luna, which becomes a lavish place for ghosts once night falls. He is constantly tired because of the unique nature of his work that flips his days and nights, but Jang Man Wol, who is always with him at the hotel, even appears in his dreams when he is finally able to sleep. Thus, in episode 3, he confesses to Man Wol, “You take up all my nights and dreams,” saying that his whole day is full of thoughts of her.

“It might be that I was pulled in the direction of my heart.”

In episode 4, Jang Man Wol states, “I’m not really sorry that I twisted your fate and dragged you here,” and Goo Chan Sung replies, “It’s not that you dragged me here. It might be that I was pulled in the direction of my heart.”

This quote refers to the events of episode 1, in which Man Wol was attacked by a vengeful spirit. When Chan Sung ran to save her, she told him, “I’ll give you a chance. If you want to run away, go now.” However, Chan Sung chose not to leave her. As a result, Chan Sung is in his current position not because of his twisted fate, but because he went according to his heart, making for a sincere declaration that is more heart-fluttering than any confession.

“A hotelier must not have personal feelings for a guest.”

An uneasy fate that Goo Chan Sung and Jang Man Wol must face is that she will one day have to leave him. Man Wol discovered this fact first, so she said to Chan Sung, “Look into [my past], take care of me, and send me off,” meaning that she would become his final guest. However, Chan Sung stated firmly, “A hotelier must not have personal feelings for a guest,” implying that Man Wol is not a guest to him.

Jang Man Wol was bothered by the thought that Goo Chan Sung was with his girlfriend, but in reality, Chan Sung was chasing after Kim Jun Hyun, whom Man Wol likes. Even though he doesn’t like Kim Jun Hyun himself, Chan Sung diligently took pictures with him while commenting, “That woman is a big fan of you.” As for his reason for going to such lengths, he simply said, “Because I think she will like it.” In the end, the last thousand years that Man Wol has lived have been shaken by the bright and earnest Chan Sung.