While IU and Yeo Jin Goo shine as the main leads of tvN’s “Hotel Del Luna,” the supporting characters are also capturing the attention of viewers.

The mysterious Hotel Del Luna houses three ghost hoteliers who have vowed, “We will protect this hotel until the day our grudges have been lifted.” They are bartender Kim Sun Bi (played by Shin Jung Geun), Head of Room Services Choi Seo Hee (played by Bae Hae Sun), and doorman Ji Hyun Joong (played by Block B’s P.O). 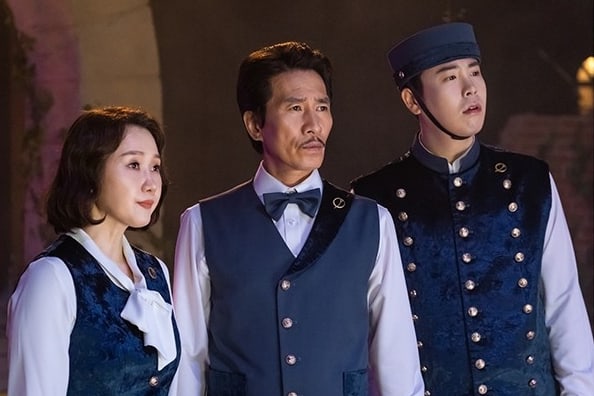 Kim Sun Bi had fulfilled his dream of passing the imperial examination and was about to return home in glory until he met a sudden death. This was all that was revealed about the character’s past in episode 6 of the drama. Unlike Choi Seo Hee and Ji Hyun Joong, nothing has been said about how Kim Sun Bi died, why he has worked at Hotel Del Luna for 500 years, or when he will pass on to the afterlife. However, at seeing leaves grow on the ancient tree, he was the first to say, “Let’s send off Manager Goo,” and strongly expressed his inability to leave Hotel Del Luna, drawing curiosity as to his backstory.

Choi Seo Hee was the wife of the oldest son of a mighty clan, but she wrongfully died at the hands of the clan. At the sound of Choi Seo Hee’s bitter cries, Jang Man Wol found her, and she has since been working as the Head of Room Services for 200 years. She is unable to leave Hotel Del Luna until she sees the last seed of her former family dry up.

However, a certain incident involving Choi Seo Hee from 42 years ago was mentioned in episode 4. Ji Hyun Joong had asked, “This year will pass without trouble, won’t it?” to which Kim Sun Bi replied, “If what happened 42 years ago happens again, Madam Choi will really be pulled to the afterlife.”

Ji Hyun Joong has been working as Hotel Del Luna’s doorman for 70 years after dying in the Korean War. He has a sister who is still alive, so he waits at the Hotel Del Luna so that he can go into the afterlife together with her when she dies. However, while playing piano with Yoo Na (played by gugudan‘s Mina) in episode 6, he broke down into tears from being reminded of his happiest days with his sister. Ji Hyun Joong drew attention for revealing a deep pain behind his bright smile and playful nature.

A producer said about the characters, “Apart from just Man Wol and Chan Sung, the backstories of these three characters are another charm of the drama. As the story progresses, the characters that make up the center of Hotel Del Luna will become more real. Please look forward to the drama to see whether these characters will be able to rid themselves of their deep-seated grudges.”