“Watcher,” will open its second act with suspense!

The OCN weekend drama follows Do Chi Kwang (Han Suk Kyu), Kim Young Goon (Seo Kang Joon), and Han Tae Joo (Kim Hyun Joo) chasing after a mysterious incident. The three of them have a tragic past incident that ties them together, and they team up together to root out corruption in the police force.

With no one to believe and nothing that can be predicted, keen attention is being paid to the second half of the drama, and the production crew pointed out the key points to anticipate as the drama spirals towards the ending.

What is the truth of the scandal from 15 years ago that shook the investigation team?

The tragic event from 15 years ago rocked the lives of Do Chi Kwang, Kim Young Goon, and Han Tae Joo, and the truth of the past that is revealed as they dig deeper into the current case is confusing them. Everyone knew that Kim Jae Myung (Ahn Kil Kang), a corrupt police officer, had been serving 15 years in prison after killing his wife. The case, however, fell into a limbo as even Kim Jae Myung had his thumb cut and was murdered. Han Tae Joo, who was conducting a re-investigation from seven years ago with suspicions over the Kim Jae Myung case, also had her thumb cut by an unidentified man.

The statements by Do Chi Kwang and Kim Jae Myung were also sharply mixed. Kim Jae Myung said he realized he had fallen into a trap on the day he was supposed to meet Lieutenant Jang Hyun Goo. He didn’t get the call Do Chi Kwang said he had made, and he claimed that his wife had been alive until he left.

What is the truth behind the tragic incident that changed the life of the corruption investigation team, and who is the real culprit in the case? There is a shocking twist ahead that no one will have expected.

The truth that runs through the past and the present: What is the identity of the invisible hand?

The six bodies found in the ecological park brought to the surface the presence of an enormous power trying to cover up the truth. In the past, the same person threatened Han Tae Joo to prevent the re-investigation of Kim Jae Myung and cut the thumb of police officer Park Si Young (Park Ji Hoon) in the same way.

More and more questions regarding the criminal’s objective and motivations are being raised as the case is delved into further. Lee Dong Yoon was ordered by his superiors to reduce and cover up Han Tae Joo’s case to the crime of a petty criminal, while Kim Young Goon witnessed that the gun the criminal used to kill Mr. Kim belonged to the police. This suggests that there is a huge behind-the-scenes plot involving the prosecution and the police. On top of that, the police leadership’s interest in Moo Il Group’s bribery ledgers are suspicious.

With the death of Kim Jae Myung that is in line with the criminal’s goal of “cleaning up all of the human mess and creating a new base,” the truth-tracking is back to square one. The investigation team will come together to find out the truth behind the culprit.

With deepening doubts, suspicions, and a fog of truth and lies, what’s the course of the investigation team? 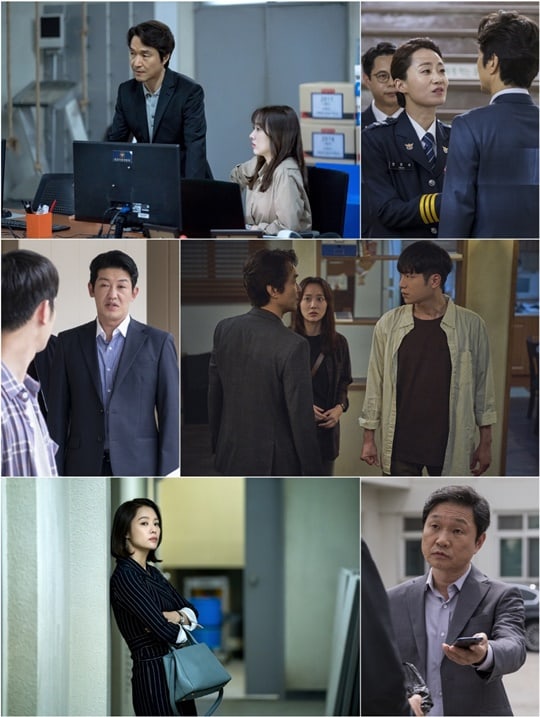 The production crew shared, “The truth of the past, which has been scattered throughout the current events, will start to come together. Please wait and see what kind of choices the corruption investigation team will make while surrounded by a mix of truth and falsehood. The surprise is only beginning. We hope you will look forward to the second act, which will present a more elaborate suspense.”

Watcher
How does this article make you feel?