The identity of contestant Driver Kim was revealed on the latest episode of MBC’s “The King of Mask Singer”!

During the August 4 episode of the singing competition, Driver Kim faced off against contestant Bulletproof Sandcastle in the second round. Bulletproof Sandcastle impressed with her rendition of EXO member Chen’s “Beautiful Goodbye,” and Driver Kim took the stage to perform Buzz’s “Thorn.” Kai commented, “Both the tone and the beat were exactly in sync. He’s an incredibly skilled person.”

Unfortunately, Bulletproof Sandcastle won the round with a score of 62 to 37, so Driver Kim remained on stage to reveal his identity. 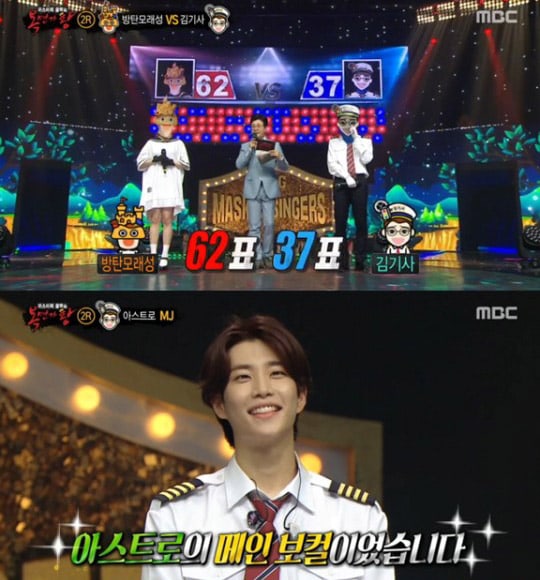 Driver Kim turned out to be ASTRO’s MJ!

After revealing his identity, MJ commented, “There weren’t many people who chose trot songs on ‘The King of Mask Singer,’ so I took on that challenge first.” MJ previously sang Park Hyun Bin’s “Trust Oppa” in the first round of the competition. When asked about releasing a trot album, MJ replied, “To be honest, if it’s possible, I want to try going solo, and I want to [perform] at an event with a trot song.”

He then added, “Our youngest member Sanha appeared on the show before, so I want ‘face genius’ Cha Eun Woo to make an appearance next.”

After the broadcast, the singer took to Twitter to share his thoughts. He wrote, “Driver Kim of ‘The King of Mask Singer’ was!!!! MJ^^ As expected, our AROHA [ASTRO’s fandom name] knew that~~>< Writer M-ThankYou.”

ASTRO
MJ (ASTRO)
The King of Mask Singer
How does this article make you feel?