HA:TFELT shared the inspiration behind her latest track “Happy Now.”

She wrote, “I’m revealing the text message that was the motif of ‘Happy Now.’ I’m sure you’re happy, but I hope you become even happier and hope that you live a fruitful life no matter what seed you plant. I’m happy now.”

The text message reads, “I really want to apologize for ghosting you like this. It’s something one should never do in a relationship, but I’m so sorry that I selfishly did something like this. I don’t know if you’ll believe me, but I was worried a lot about you during it and I didn’t know how to begin talking to you again. I know it’s a ridiculous excuse, but it’s what it is. While reading the KakaoTalk messages you sent me, I thought that you should just curse at me instead. I’m sorry that I acted nice while doing worse things than other guys. I was always sincere while dating you and I thought a lot about how I wanted you to be happy even though it isn’t because of me.”

The message continues, “I sincerely lack in expressing myself through words, so I feel frustrated that I can’t convey my feelings towards you even though I want to. That’s also something that I regretted while dating you and I still feel frustrated that I can’t do that now. I’m sure I’ll now be included in the men that you think about in that way, but I’ve never acted in a way that was different from my sincere feelings. I don’t know how to end this, but I wanted to apologize correctly and I’m sorry.” 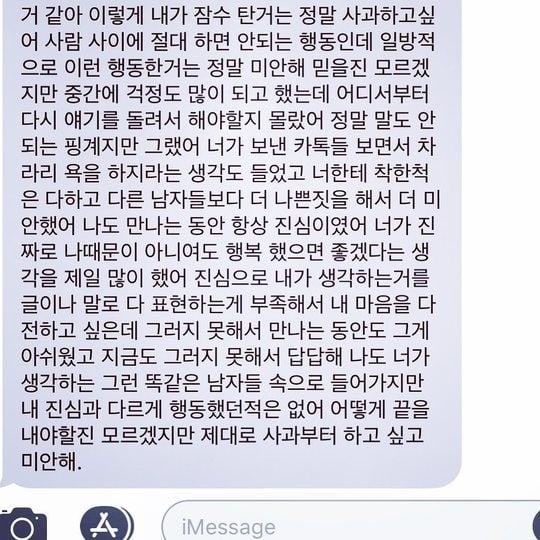 On August 1, HA:TFELT released “Happy Now,” featuring MAMAMOO’s Moonbyul, as the second Amoeba Culture collaboration project. The track directly expresses hope that the other person won’t be happy with hard-hitting lyrics such as, “Your motto for dating is enjoying, your role model is an older guy who dates Miss Korea contestants, your hobby is DM, your specialty is ghosting and bragging that you dated me.”

In April, HA:TFELT appeared on MBC every1’s “Video Star” and opened up about her love life. She said, “My relationship recently ended badly. My ex-boyfriend ghosted me. I’m using the ghosted break-up as experience to work on a song called ‘Happy Now.'”

You can check out the MV for “Happy Now” here.