On the August 4 episode of the girl group headed to Uljin Beach after visiting the city of Gyeongju on their fourth day of camping.

Lee Hyori asked, “Do you think you could release an album and promote?” and Lee Jin and Sung Yuri replied, “I don’t think I can. Can we sing live?” Lee Hyori added with a laugh, “I think we’ll rise to No. 90 something on the music chart then fall down.”

Fin.K.L then began to discuss the logistics of holding a reunion concert. Ok Ju Hyun began, “If we get to do a concert…” and Lee Hyori said, “Then we’ll do it.” Lee Jin replied, “I feel the same way. I also want to do it” and Sung Yuri interjected, “Me too.” The members then brought up the issue of time needed for the long period of practice leading up to the concert.

Lee Hyori continued, “It’s not like we can just come one day to perform. I thought about that, and there are dancers in New York and Jeju Island. They can learn our choreography after watching it just one time. We can practice where we are individually, and just match it together.” Sung Yuri asked, “What do we do about recording?” and Ok Ju Hyun and Lee Hyori replied, “We can do the recording in one day.”

Sung Yuri then asked Lee Jin, “Do you think you can do it?” Lee Hyori commented with a laugh, “I don’t think she’s the type to worry too much about something. She has the facial expression of ‘I’ll do it if we’re doing it.'”

Ok Ju Hyun stated, “We’re not a group that people expect amazing vocals from.” Lee Hyori concluded, “Let’s talk about the details little by little,” and the members got ready for bed. 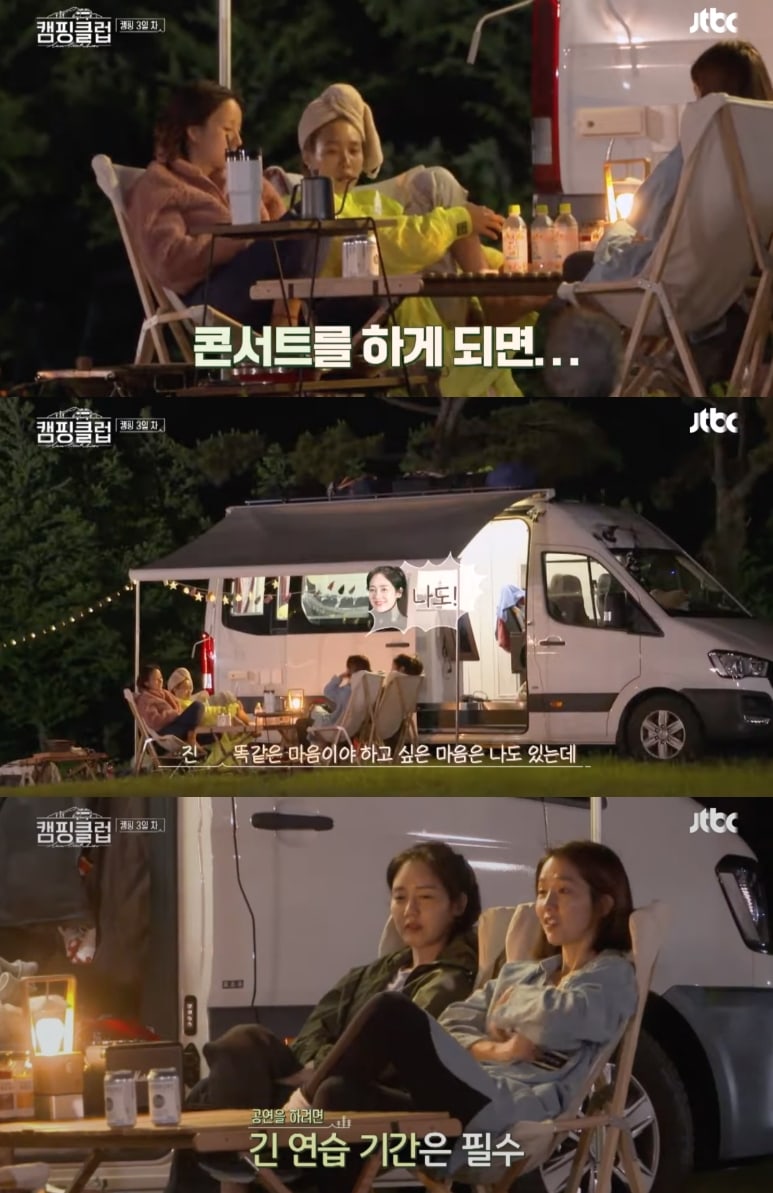 Next morning, Lee Hyori and Lee Jin went out to see the sunrise while sitting on a rock and drinking tea. Lee Hyori said, “You were like that during the Fin.K.L days and now as well, but how do you just accept everything?” Lee Jin answered, “There were times when I was uncomfortable, but I think time helps. When I look back at things, there were also many instances when I felt sorry. I also say I don’t like something when I dislike something, and you can see it on my face. I’ve always been that way. I’m grateful [about that].”

Getting teary, Lee Jin continued, “I feel something like repentance now that I’m up here, and I get to reflect on the past too. I didn’t know our personalities were so similar. Nothing has changed, but why did I find this out now?”

Lee Hyori confessed, “I really wanted to resolve any hard feelings after this camping trip. Seeing the three of you meet up often, I didn’t feel anything. Instead of feeling upset at you guys, I wondered in the back of my mind if there was a problem with me. I thought that you guys really disliked me.”

“Camping Club” airs on Sundays at 9 p.m. KST, and will soon be available on Viki!

Fin.K.L
Camping Club
How does this article make you feel?